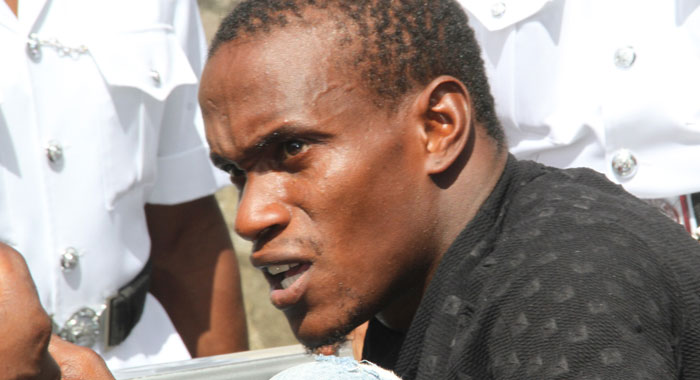 Silbert Bobb said he was defending himself during a gang attack. (iWN photo)

A Campden Park man, on Wednesday, escaped a direct prison sentence because his criminal record was not presented to the court after he pleaded guilty to a wounding charge.

Silbert Bobb was instead ordered to pay EC$400 forthwith for his crime or spend three months in prison.

But Magistrate Bertie Pompey, in handing down the sentence, made it clear to Bobb that had his criminal record been presented to the court, “you’d be on your way to HMP (Her Majesty’s Prisons) now”.

Bobb pleaded guilty to a charge that on Dec. 25 at Campden Park, he unlawfully and maliciously wounded fellow villager, Ian Baptiste.

The court heard that the defendant and virtual complainant know each other very well.

The defendant said something to Baptiste then pelted a bottle, striking him in the head, despite his efforts to dodge it.

Bobb then drew a green-handled knife from his waist and, Baptiste, on seeing this, started to run.

Baptiste, however, stumbled and fell and Bobb stabbed him in his neck and left arm.

Baptiste reported the matter to the police, and Bobb was charged.

The arresting officer said he had found no record of Bobb having been convicted of an offence.

However, prosecutor Delroy Tittle, a police officer, told the court that having worked at the Questelles Police Station, he knows for a fact that Bobb has a criminal record.

The prosecutor further asked the court to consider in sentencing, the fact that the virtual complainant was stabbed in the neck.

In mitigation, Bobb told the court that his actions were in defence of himself because “is ah gang thing”.

He said that he was attacked by a gang and Baptiste went to the police station after the incident.

“Is not the first time they harass me,” he told the court.

The magistrate, however, asked the defendant why he had not gone to the police station.

He said he could not have done so at the time because his alleged attackers had bottles and cutlass.

Bobb further denied having pursued Baptiste in order to stab him.

In handing down the sentence, Pompey told Bobb that he had initially considered a fine of EC$250, but changed his mind after hearing the facts and the aggravating factors in the case.