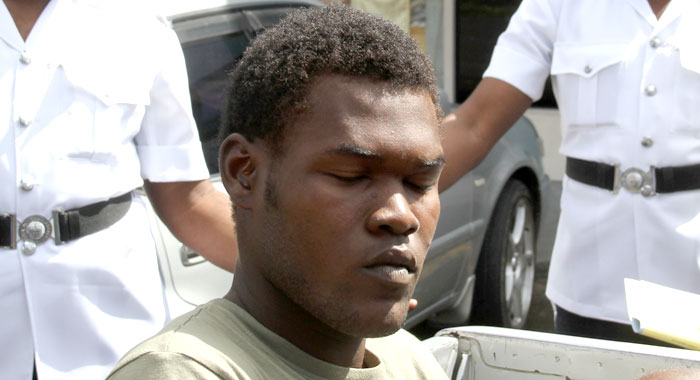 The prosecution asked the court to give Danroy Dallaway a shock so that he can reflect on his violent ways. (iWN photo)

A Chauncey man was, on Wednesday, sent to prison for 12 months after Magistrate Bertie Pompey concluded that he was a violent man, having attacked and injured two villagers since September.

The man, Danroy Dallaway, was handed two prison terms, one for 12 months and the other for eight months, but would only serve 12 months, since the sentences will run concurrently.

He pleaded guilty to a charge that on Dec. 24 at Chauncey, in a public place, he made use of threatening language to Jeranzo Thomas, to wit, “Ah going kill yo’ tonight.”

Dallaway further pleaded guilty to a charge that on the same date at Chauncey, he unlawfully inflicted grievous bodily harm on Thomas.

He was further charged that on Sept. 22, at Chauncey, he wounded Winston Phillips of the same address, a charge to which Dallaway also pleaded guilty.

The court heard that both Dallaway and Thomas live at Chauncey and know each other well.

On Dec. 24, about 3:30 a.m., Thomas was walking from a karaoke event at a shop in the South Leeward community when he saw the defendant coming towards him.

The court heard that Thomas was able to recognise Dallaway because of the streetlights in the area.

He further observed that Dallaway had a piece of steel and a pair of scissors in his hands.

When he was about two feet away from Thomas, Dallaway said, “ Ah going kill yo’ tonight”, and started to beat the man with the steel.

Thomas was able to use his left hand to block some of the blows from reaching his face and head.

Dallaway then took the scissors and began to stab Thomas, striking him on the left hand.

The defendant then left the scene and Thomas reported the matter to the police.

In relation to the Sept. 20 assault on Phillips, the court heard that the virtual complainant is a 51-year-old carpenter, also of Chauncey, who knows the defendant well.

On the date in question, Phillips went to the home of Vanessa Keil to work, where he met the defendant and one “Bull”.

The defendant was drinking alcohol and Phillips and Bull proceeded to do their work.

Around lunchtime, Keil gave Phillips some food and Dallaway asked him for a piece of breadfruit and the virtual complainant refused.

Phillips was sitting on a steel chair and Dallaway pulled it from under him, causing him to sustain an injury to the head.

Dallaway then took the chair and began to beat Phillips with it. .

Prosecutor Delroy Tittle told the court that although Dallaway has no convictions, the facts presented to the court show that he is a violent person.

The prosecutor said that the defendant must be given “a shock”.

“I am not saying a sharp shock, but one in which he can reflect on his behaviour,” Tittle said, and told the court that he is asking for a custodial sentence.

Dallaway said he had nothing to say on his own behalf.

The magistrate told the court that even before the prosecutor’s submission, he had been considering a custodial sentence, having seen the medical report of injuries that the virtual complainant has sustained.

He said the injuries that Thomas sustained included deformity and lacerations to the left arm and fractured bones.

“You are a violent man,” the magistrate said.

He, however, said that in arriving at the sentences he had taken into account that Dallaway had never been convicted of an offence and had pleaded guilty at the first opportunity.

Pompey, therefore, sentenced the man to 12 months in prison for the Christmas Eve attack and eight months for the Sept. 20 offence.

He reprimanded and discharged the defendant on the threat charge, noting that the man had acted immediately on his threat.

This left some persons wondering why the accused man was not being charged with attempted murder.