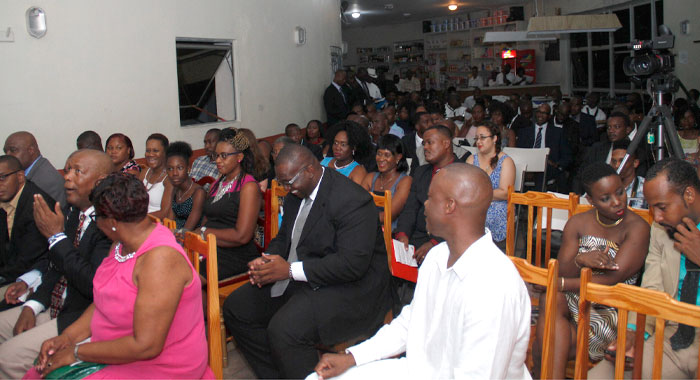 Police officers and their guest during a light moment at Thursday’s event. (iWN photo)

The police force has changed immensely, so much so, that in addition to better compensation packages, policemen are now considered in a more favourable light as suitors among middle class families.

That was the view of Prime Minister and Minister of Minister of National Security Ralph Gonsalves as expressed at the annual police award event in Kingstown on Thursday, Dec. 28, 2017.

“One of the big changes I notice, middle class families never wanted a policeman to cross the steps of their tenement.

“Nowadays, middle class mothers and fathers are asking the policeman them to come cross and see if they can have a second look at their daughter whom they might have rejected on the first go,” the prime minister said to laughter.

“So I have lived to see all those things. And that’s an important change you know. It tells you the esteem in which the police, increasingly, are being held.”

Gonsalves, however, said that with 800 police officers, and Coast Guard and other personnel adding a further 400, one would expect to find a “bad apple”.

“Even in the priesthood, you find bad apples. And we have to try to keep at a minimum the bad apples,” he said.

“And from time to time, we may quarrel and so on, but I want you to know that I have nothing but the deepest admiration for you. And I have love in my heart for every one of you and there is no malice in me whatsoever and I will always go out to support and defend and promote the police force and the police officers,” the prime minister said.