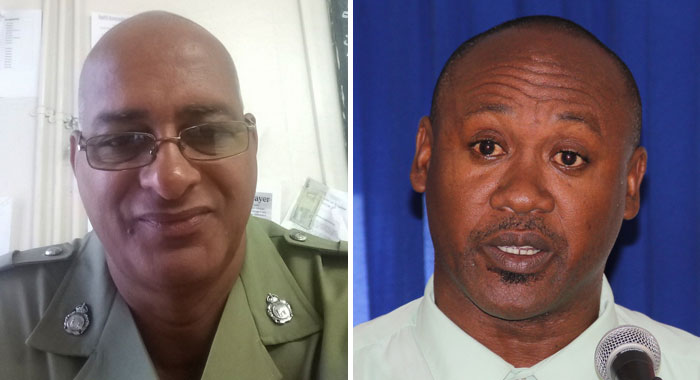 Superintendent of Police, Richard Browne, left, is in charge of the elections. At left is Sargeant Brenton Smith, incumbent chair of the Police Welfare Association. (Photo: Facebook & iWN)

Incumbent chair of the Police Welfare Association (PWA), Sergeant Brenton Smith has expressed concern about the decision by senior officers of the Royal St. Vincent and the Grenadines Police Force to postpone until next week the counting of votes in the election of a new executive, which took place on Friday.

“However, it’s a bit concerning to me and other executive members, that, having spoken to the supervisor of the elections, Superintendent [of Police] Richard Browne, he indicated that the counting will not be done until Tuesday.”

Smith said he has a serious problem with this, noting that had the elections been a vote to elect Members of Parliament, the counting would have been done the same day.

“And I couldn’t see why the counting could not have been done even tomorrow (Saturday) with the deputy supervisor of the elections, ASP Charles in his (Browne’s) absence, if he doesn’t want to come to work on Saturday.

Smith said that senior and other officers will be visiting on Monday in Richland Park, one Sergeant Charles who is ill.

He said that Browne had told him that as a result of this, the counting of the votes would be done on Tuesday.

“I have a serious problem with that. I find it really, really outrageous, ridiculous and so, too, my colleagues overseas, who have been asking about the elections and the results.

“So, this is something we have to look at carefully and closely,” Smith said.

But acting Commissioner of Police, Colin John told iWitness News on Saturday, that Browne has told him that the cause of the delay was two-fold.

The ballots from Union Island and Canouan had not arrived in Kingstown on time for a count on Friday.

Further, Browne would be involved in training course relating to the handling of sexual offences on Monday, hence the day.

The police chief, however, told iWitness News that he has instructed the superintendent to try to count the votes on Monday.

The election came at a time when Smith and another member of the incumbent executive are still waiting to go through an internal disciplinary procedure for comments he made in a WhatsApp voice note last year.

In the comment, Smith spoke about storming the office of Prime Minister and Minister of National Security, Ralph Gonsalves, in an effort to have him address a number of issues affecting police officers.

Friday’s election took place just two weeks after Smith, in a New Year’s address to members of the PWA, urged that they “must never be as selfish as the snitch in the executive”, an apparent reference to the person(s) who leaked the WhatsApp voice note that led to the charges against and transfer of he and Police Constable Kenroy Martin, and the transfer of Police Constable Jeremain Roberts.

Smith said 2017 has been “a very challenging year” for the executive and general membership of the PWA.

“These challenges began very early in the year simply because some members were of the view that the status quo should remain the same and campaigned bitterly against me and other potential candidates for the PWA elections.”

Smith said that his announcement that he would run to be chair of the PWA “created bitterness among senior members of the executive as it seeped through their veins like an infectious disease which further spread through the top rank of the police force.

“Some senior members forgot what their roles and responsibilities were. In fact, totally ignoring the laws that govern the PWA which clearly state that its members should be from the ranks of constable to inspector,” he said.

In the New Year message, Smith told PWA members that despite the many challenges, executive members must “stand resolute and determined to fight for your rights.

“We must never allow the powers that be to take us down the wrong path. We are true champions in our own rights and must continue to support each other so that our lives and working conditions can be improved,” he said.