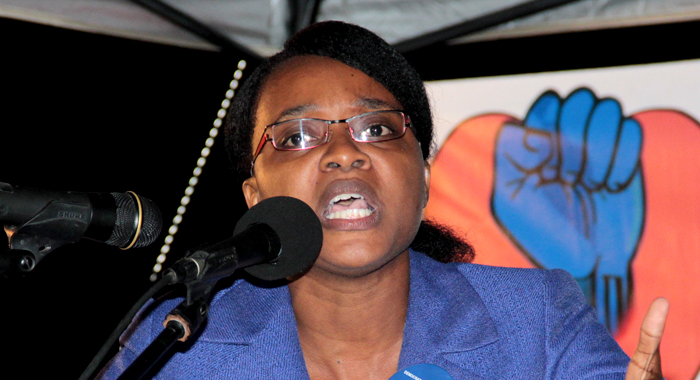 The Democratic Republican Party (DRP) says it “vehemently condemns” what it has described as an attempt last week by Prime Minister Ralph Gonsalves’ “to justify the illegal, anti-free speech components of his government’s Cybercrime Act 2016”.

“The fact that the Prime Minister has so boisterously echoed sentiments for the cybercrime law at this time on the matter of Ms Farrell, who from most accounts has made allegations about his son and other ministers of his cabinet, reveals what we have always denounced — that is, that the real purpose of this law seems to be to protect the interest of state officials and indeed the head of government,” head of the minority opposition party, Anesia Baptiste, said in a press statement.

Baptiste said Gonsalves’ attempts came as he commented on the saga involving former Caribbean Next Top Model contestant, Vincentian, Yugge Farrell, 22, who has been charged with using abusive language to the prime minister’s daughter-in-law.

Baptiste, a rights activist, said that having listened to Gonsalves’ comments on WE FM last Wednesday and Thursday, Jan, 10 and 11, “the DRP decries the prime minister’s comments as irresponsible, potentially prejudicial to the matter of Ms. Farrell’s case and a wicked attempt to vindicate his thirst for usage of criminal libel laws through the Cybercrime Act 2016”.

Baptiste has been in staunch opposition to the Cybercrime law, which was passed in Parliament amidst strong objections by the parliamentary opposition and regional and international freedom of expression agencies.

Gonsalves has attempted to use the case surrounding Farrell to justify his government’s passage of the law.

Farrell was charged that on Jan. 4, she used abusive language, to wit, “you dirty b***h” to Karen Duncan-Gonsalves, a senior Crown Counsel, and wife of Minister of Finance, Camillo Gonsalves, the prime minister’s son.

In a press statement issued last Friday, Baptiste said that the prime minister made no comments about the cybercrime bill “when potentially defamatory statements were made of one journalist here — Mr. Kenton Chance — as well as of the DRP’s political leader Anesia Baptiste.

“Are the Cybercrime law and justice only for a special elite?” Baptise said.

She noted that during the debate on the cybercrime bill, she had cited the following the International Press Institute’s Training manual for Journalists as saying, “The danger with criminal defamation — and one of the many reasons why defamation should be a purely civil matter — is that the involvement of the state in prosecuting alleged defamers shifts the matter very quickly into the punishment of dissent. At the least, it gives additional and excessive protection to officials and government.”

Baptiste asked the public to note that Farrell’s matter has not been ruled on by the court.

“She has not been tried and there is no verdict. This charge is also not under the Cybercrime Act 2016,” Baptiste noted of the woman, who the court sent for two weeks of psychiatric evaluation, ahead of her next court appearance on Jan. 22.

“Ms. Farrell has not appeared before the court on any criminal cybercrime charge, has not been tried and there has been no verdict,” she said, noting that Searchlight journalist, Lyf Compton reported in that newspaper in August 2017 that Farrell had been under investigation for alleged possible breach of the Cybercrime law.

“Therefore, when asked by radio talk show host on WE FM about cybercrimes, the Prime Minister’s comments claiming that Ms. Farrell’s matter shows the need for the Cybercrime law suggests already that Ms. Farrell is deemed guilty of its breach. These comments coming from him as Prime Minister can be highly prejudicial and ought not to have been made by the head of government, if he is so interested in the justice process,” said Baptiste, who is a former senator for the main opposition New Democratic Party.

The statement noted that Gonsalves had said, “When somebody goes in the media — in cyberspace and say — somebody kill, somebody rape, somebody defraud, this person is a homosexual, that person is engaged with somebody in homosexual acts, this person is a whore — issue threats — I will kill so and so — you know all of these things they have to be regulated…and the existing laws could capture some of it and that is why you need a specific cybercrime bill.”

“The DRP maintains that the crimes and civil wrongs listed by the Prime Minister in his comments are already captured and can be addressed using [the] current criminal code and civil defamation laws and, therefore, do not justify a need for cybercrime legislation. “

Baptiste noted that a person found guilty of an offence under Section 18 of the Cybercrime Act 2016 — which speaks to libel by electronic communication — could pay up to EC$50,000 in fines or spend two years in prison, or both.

Baptiste said imprisonment by the state for speech is never ideal in democratic societies that preach protection of free speech against government’s encroachment.

“It is an archaic and backward inheritance from colonial times from the days of kings and queens who ruled tyrannically with no respect for the inalienable rights and freedoms of mankind.”

Baptiste repeated her position that the phrasing of some parts of the bill allows for criminalisation of the truth.

“It speaks of publishing information which ‘causes a person to feel frightened, intimidated, distressed… causes harm to the health or reputation of the person’. The ingredients of the offence are a claimant’s subjective feelings and their claim that harm has been suffered to their health or reputation, even when the information published is the truth, because there is no defence outlined in the law for truth,” said Baptiste, who holds a degree in law.

“This law is a dangerous precedent for the state to set in a free society where truth must be allowed to flourish in order to correct immorality and possible state and other corruption. During the select committee meetings, I warned about legislating what I called the Herod principle, using the example of how King Herod had been encouraged into beheading John the Baptist because the latter had exposed his adulterous affair with his brother’s wife.”

Since her hospitalisation, videos have appeared online of Farrell saying that she had an extra-marital relationship with Camillo, which ended in 2016.

Camillo has not commented on the ongoing saga and the prime minister has said that he has advised Camillo not to comment yet.

7 replies on “Is cybercrime law to protect SVG’s elite? — DRP”