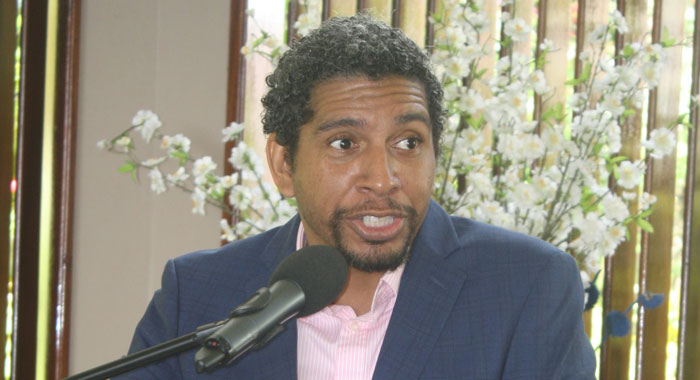 Minister of Finance, Camillo Gonsalves, also has ministerial responsibility for statistics. He is photographed her at the Chamber of Commerce’s event last Thursday.

The Minister responsible for statistics has apologised to the business community for the joblessness figure recently published by the International Monetary Fund (IMF).

Camillo Gonsalves, who is also Minister of Finance, told the Chamber of Industry and Commerce luncheon on Thursday that the IMF should not have been given the figure showing that 46 per cent of the nation’s youth are unemployed because that is not the case.

“I noticed — and I will just mention it in passing — that there was some coverage in the press about an issue of 46 per cent youth unemployment.

“As the minister with responsibility for statistics, I want to apologise for that information making it into the public domain,” he said.

“This is some data that was still being scrutinised and was not ready for release and is actually not accurate — today the least. And there are a number reasons why.  It was done right when the university students were coming home from university and graduating from college and all of them were marked as unemployed and there were some other data collection challenges that we faced at the time.

“I’ll discuss it more fully when the opportunity presents itself. Except just to say that that number was an inaccurate number and it is unfortunate that it entered the public domain,” Gonsalves said.

Gonsalves, who is also Minister of Economic Planning, was referring to the IMF’s the 2017 Article IV Consultation Staff Report for SVG.

The report said that unemployment among persons ages 15-24 was 46 per cent.