No ‘undue burden on the budget’ expected from new posts 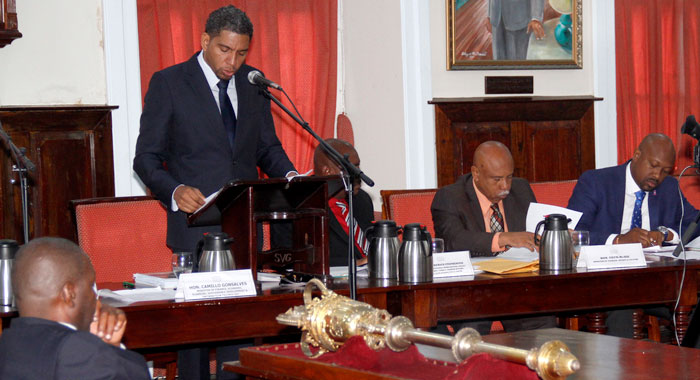 Minister of Finance Camillo Gonsalves in Parliament as he presented the Estimates on Monday. (iWN photo)

The appointment of 103 graduate teachers effective Jan. 1, 2018 is not expected to put undue burden on the EC$993,535,449 budget expected to be debated in Parliament next week.

In presenting the Estimates to Parliament on Monday, Minister of Finance, Camillo Gonsalves noted that the implementation of this policy has not resulted in an increase in the number of teachers in the establishment or placed undue burden on the budget.

“In fact, the total number of teachers in the system declined marginally by 22, a mere 1.2 per cent,” Gonsalves said.

He said that, similarly, the estimated cost to the consolidated fund for this measure, inclusive of increments for all teachers, is EC$1.5 million.

The finance minister said that his ministry was able to achieve this by utilising savings from existing budgetary provisions at the Grades F and E levels — teachers IV and V — to fund some of the new graduate teachers.

The government also traded off lower grade teaching positions such as Teacher I and II that were vacant to create the space to add the additional graduate teachers.

Gonsalves said that all temporary clerks — a total of 64 — previously paid by the Service Commission’s vote have been confirmed as junior clerks and their salaries have been allocated to the various ministries and departments where they have been employed over the recent years.

“Hence, this decision has not resulted in an increase in the number of public servants and have had a very minimal impact on cost.”

He said that 98 positions have been created across the public service to enhance service delivery to citizens.

Forty-six additional posts have been allocated under the Ministry of National Security.

“The manpower of the police service has been increased by a net of 40 constables to ensure that we have sufficient boots on the grounds to bolster our efforts on the ground in citizen security, safety and reduction of crime.”

Five additional immigration officers have been provided to strengthen the department’s ability to properly service the travelling public at the Argyle international Airport.

He said that 50 constables are actually provided for in the Estimates, but the Minister of Finance, will discuss this and he would address it in his Budget Address — scheduled to be presented on Monday.

The finance minister said that the government has reduced the number of rural constables from 20 to 10, based partially on lessons learnt about the effectiveness of some of those rural constables.

“We have retained the good and we intend to do some new tactical and strategic outreach to help protect farmers, their livestock and their crops going forward later on,” said Gonsalves, who had been critical in a closed-door meeting with trade unions last year about the effectiveness of rural constables in curbing praedial larceny.

The finance minister said that the Ministry of Health, Wellness and the Environment has been allocated 35 posts to strengthen hospital, community health and mental health services.

There are also additional posts related to the Modern Medical Complex in Georgetown, which were not reflected in these Estimates because they had been planned for previously.

iWitness News understands that the government is considering opening the long-delayed complex on Feb. 14.

The minister said that this year, the government would add a considerable amount of staff at the complex.

“Forty-eight, I believe, locals, and an additional 23 experts from Cuba, who will be joining the modern Medical Complex at Georgetown, I believe I have not misspoken there, Honourable Minister of Health,” Gonsalves said.

He said 12 posts have been created within the Ministry of Finance mainly to enhance the capacity of the Customs and Excise department and some additional passenger-processing staff related to AIA.