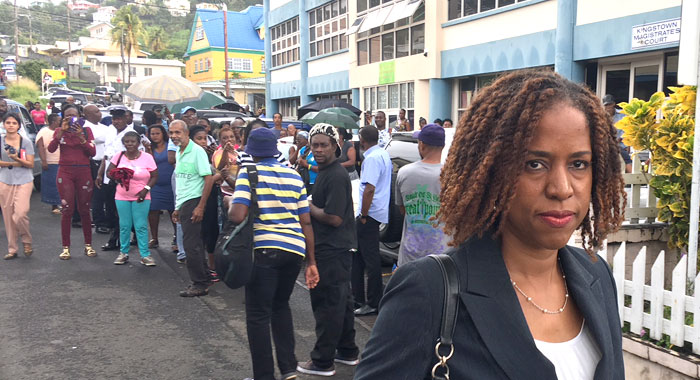 Karen Duncan-Gonsalves, wife of Finance Minister Camillo Gonsalves — with whom a former model half his age says she had an extra-marital relationship — was stoic on Monday during her court appearance relating to a charge of abusive language which she has brought against the model.

It was the first of the three times that the matter was called that Duncan-Gonsalves appeared in court.

The former model, Yugge Farrell, who is 21 years younger than Mr. Gonsalves, is charged that she used abusive language to Duncan-Gonsalves by calling her a “dirty b***h” on Jan. 4 in Kingstown.

Farrell pleaded not guilty at her arraignment on Jan. 5 and was sent for two weeks of psychiatric evaluation, although the prosecutor gave no reasons to support their application before Magistrate Bertie Pompey.

Duncan-Gonsalves was also not in court last week Monday, Jan. 22, when Farrell reappeared in court after the two weeks of evaluation.

And, on Monday, when the matter was first called, Director of Public Prosecutions, Colin Williams, told the court that Duncan Gonsalves was not summoned to court and had only been informed that morning that she was required to be in court.

The magistrate stood down the matter to allow the complainant to arrive.

However, as Duncan-Gonsalves was still not in court, the Magistrate asked, “Mr. DPP, how long am I expected to wait on the complainant.”

The chief prosecutor then told the court that he had been told around 9:15 a.m. that Duncan-Gonsalves was at Ratho Mill — about six miles from Kingstown.

Shortly after, the DPP informed the court that Duncan-Gonsalves had arrived, and the hearing went ahead.

The court, having received a second medical report indicating that Farrell can be released from the psychiatric hospital as an outpatient, granted the woman EC$1,000 bail with one surety and ordered her to return to court on Dec. 17.

Sometime after the proceedings, Duncan-Gonsalves left the precincts of the court and walked in the direction of downtown Kingstown.
She did not respond to an iWitness News request for comment.

A modest crowd of mainly women gathered outside the Kingstown Magistrate’s Court and celebrated Farrell’s release.

Among them was activist Luzette King and members of her activism group, “Frontline”.

King urged her followers, composed of supporters of the main opposition New Democratic Party, not to harangue Duncan-Gonsalves when she leaves the court.

“Please, nothing to Karen,” King said.

“Please, do not say anything to Karen. We are all victims in this. All of us,” she said.