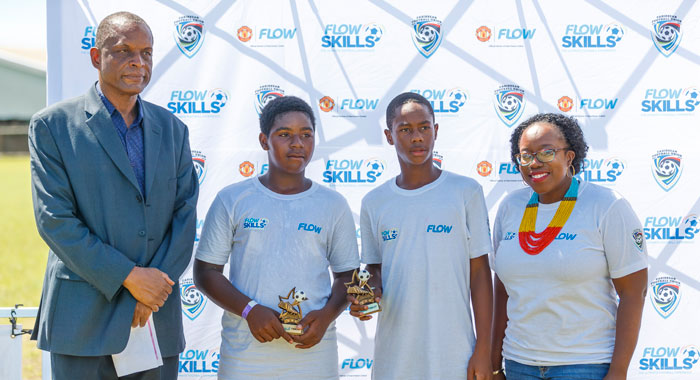 For the second consecutive year, two Vincentian footballers have been given an opportunity to compete against other athletes across the region for a chance to be seen by some of the world’s top coaches and Manchester United Legends.

Oryan Velox and Denzel Bascombe were selected from among 56 footballers to travel to Trinidad and Tobago at the Flow Skills Ultimate Football Experience on Saturday.

The event, which was hosted at the Campden Park Playing Field, saw the selection of Velox and Bascombe to represent SVG in Trinidad and Tobago following their participation in a series of Manchester United Soccer School’s skills test programme.

Velox, a student of the Central Leeward Secondary School was selected from the 12-13 category. He represented the Layou FC.

Representing System 3 FC, Bascombe, a student of the St. Vincent Grammar School, was selected from the 14-16 division.

Meantime, Coach Bishon Williams sang high praises to Flow for hosting the inaugural Flow Skills event for the second time. He noted that it is not only beneficial to the athletes but also to the coaches.

Williams added that the opportunity to travel to Trinidad and Tobago offers the athletes the much-needed exposure on a regional platform where they would be able to measure themselves with their regional counterparts.

Williams, who is also the coach for the North Leeward Predators, accompanied one of the 2017 finalists, Diel Spring, to the twin-island republic. He stated that the opportunity also allowed him to network with regional coaches.

The renowned coach stated that Flow is embarking on an exceptional initiative, however, he did not hesitate to suggest its expansion in the coming years.

This as he highlighted that there are many talents in SVG who are anxious to take advantage of such an opportunity.

Meantime, Velox and Bascombe are expected to leave for Trinidad on March 22 and is expected to participate in a series of training that weekend.

In Trinidad, the athletes are expected to participate in a series of drills designed by the Manchester United Soccer School.

There they will compete for the chance to win a once-in-a-lifetime trip to travel to Old Trafford in Manchester, England along with their coaches and parents.

This VIP experience will also include a visit to the Manchester United Football Museum, where they will get the opportunity to take in the history of the club followed by a tour of the iconic stadium.

Also, Manchester United legends Quentin Fortune and Dwight Yorke will be making appearances in Jamaica and Trinidad, respectively, to offer their tips and advice.