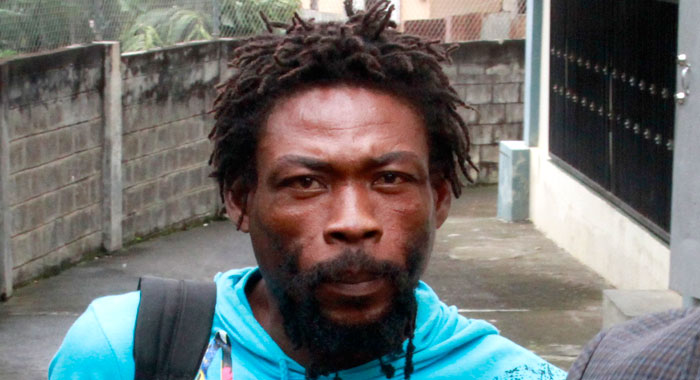 Jeremiah Ashton has been jailed for his crimes. (iWN photo)

The Fitz Hughes man who damaged a television when he discharged a shotgun in the North Leeward village has been jailed for gun and ammunition possession and other charges.

During his sentencing hearing on Wednesday, two days after pleading guilty to the charges, Jeremiah Ashton told the court that he was sorry for his actions.

He said that if given time, he would compensate the virtual complainant, Calville Harry of Fitz Hughes, for the damage done to his 40-inch Samsung television, value EC$4,000.

But Chief Magistrate Rechanne Browne-Matthias told the man that the television should be the least of his worries, in light of the fact that he had pleaded guilty to possession of a firearm and ammunition without a license.

She noted that the man had entered early guilty pleas, and no previous convictions were presented to the court.

On Monday, Senior Prosecutor Adolphus Delplesche told the court that he knows that the man has a criminal record but the police had said that they had located none.

In passing sentence, the chief magistrate noted that a firearm was discharged and that it caused damaged to something and “nearly someone”.

She further noted that the crime was committed under the cover of darkness, at 5 a.m.

The pointed out that on Jan. 16, 2016, the Court of Appeal upheld the five-year sentence imposed on Azzie Bowens for possession of a loaded unlicensed firearm.

In that case, the court opined that possession of an illegal firearm is a very serious offence and there are too many gun crimes in St. Vincent and the Grenadines.

“The society was concerned about these matters and the Court had a responsibility to ensure that when persons are convicted of such offences, they are dealt with accordingly,” the court said in upholding the original sentence.

The magistrate said this was insightful.

The sentences would run concurrently.

On Monday at the Serious Offences Court, in Kingstown, Ashton pleaded guilty to charges of possession of an unlicensed Yildiz 12-gauge shot gun, serial number unknown, and six rounds of 12-gauge ammunition at Fitz Hughes one day earlier.

The man also pleaded guilty to discharging the firearm in a public place within 100 yards of the public road.

He further pleaded guilty to a charge that on Sunday at Fitz Hughes, without lawful excuse he damaged one black 40-inch Samsung television, value EC$4,000, the property of Calville Harry of Fitz Hughes and was reckless as to whether such damage would occur.

The man also pleaded guilty to a charge that he entered into Harry’s yard with intent to commit the offence of assault.

The charges came after Harry made a report to the Chateaubelair Police Station about 5 a.m. Sunday, regarding damage to his television and discharge of a firearm at him.