Judgment day is nigh in ‘spiritual warfare’ hot water case 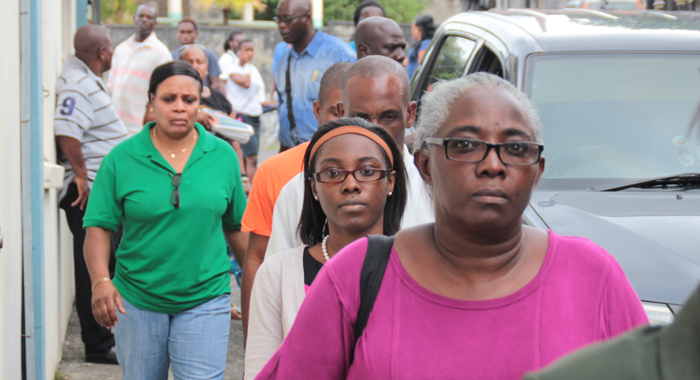 Althia Morgan, her daughter, Krystal, husband, Nigel, and police officer arrive at the Serious Offences Court in Kingstown in April 2016, when they were arraigned. (iWN file photo)

The Christian family who was videotaped on April 9, 2016 pouring a hot liquid on a man will face judgment on Monday, two years after the incident, which they had told iWitness News was an act of “spiritual warfare”.

Senior Magistrate Rickie Burnett was scheduled to give his ruling on the two-year anniversary of the incident, but had to delay it to hear further submissions from the prosecution and defence on the issue of joint enterprise.

The magistrate is now scheduled to hand down his verdict at the Kingstown Magistrate’s Court on Monday, in the case that has captured the attention of the public, which has at times demonstrated impatience for a resolution.

Senior Prosecutor Adolphus Delplesche has argued that preacher Nigel Morgan, his wife Althia, an office worker at The News newspaper, and their 23-year-old daughter, Krystal, all of Hopewell, Mesopotamia, planned the assault on Caruth, Mesopotamia resident Cuthbert “Mafia” Victory, which left him with burns to his back, shoulders, chest and face.

In the video, which was widely circulated on social media, the older Morgans are seen holding Victory while their daughter pours on him what was later revealed to be a hot liquid. (Scroll for video)

In her defence, Krystal Morgan told the court that she was having discomfort from her period and was about to make a cup of tea when she heard noises that suggested that her parents were under attack.

The woman claimed that she can’t recall how she got from the kitchen on the upper floor of their two-storey house, to the street, where she poured the hot water on the man.

“I felt as if my soul left my body,” she told the Kingstown Magistrate Court while testifying on Feb. 2, 2018.

She said that even up to the point of giving evidence she did not know who it was that she had hurt.

In their defence, the older Morgans presented themselves as having been under attack by Victory, a 39-year-old construction worker, who had gone to visit a friend who was the Morgans’ neighbour.

However, Mr. and Mrs. Morgan admitted to the court that they had attempted to use olive oil on the man while, praying for the man — although he had requested or agreed to neither — because, according to Mr. Morgan, Victory showed signs of needing spiritual deliverance.

The only other witness presented by the defence was a Pastor Manson Shortte, who was called as a character witness.

The video of the incident was not tendered in evidence, reportedly because police who investigated the matter did not act soon enough to secure a deposition from the person who recorded it.

The person who recorded the video reportedly left St. Vincent soon after the incident.

However, the “star witness” for the prosecution, Clint Antoine, of Biabou, who was the Morgans’ neighbour at the time of the incident, told the court in April 2017 that Mr. and Mrs. Morgan and Victory had an exchange of words.

He said during the exchange of words, Mr. Morgan placed his hand on the bottle then placed it above Victory’s forehead. Victory swung his hand and Mrs. Morgan held on to him and they began fighting, Antoine told the court.

He said Mrs. Morgan shoved Victory about two times and he held on to a tree and they were still wrestling.

Antoine told the court that Victory and Mr. and Mrs. Morgan fell into the drain and the fight continued.

Using a police officer to demonstrate, Antoine told the court that Mr. and Mrs. Morgan each held Victory on each of the two sides of his body in such a way that he couldn’t set his free his hands. He said that while they held him in that position, their daughter came with a black and silver kettle.

While she was approaching, Mr. Morgan looked around twice and appeared as if he was about to say something, Antoine said.

While Mr. and Mrs Morgan were still holding Victory, with his back turned to all three of the Morgans, Krystal poured the contents of the kettle onto him, Antoine told the court.

He said that Mrs. Morgan then swung Victory, causing him to hit his head against the stone wall of the drain and he then saw what appeared to be blood on Victory’s body.

Victory then staggered out of the drain then began to run, Antoine said, telling the court that it was at this point that he, too, left the scene.

That the matter has gone to trial was, apparently not in the contemplation of the two older Morgans.

When iWitness News asked them on April 13, 2016 – four days after the incident – whether anyone had been charged, Mr. Morgan said, “Charged for what? You said you spoke to the guy… He is doing all the talking. This is a spiritual warfare. It is in the hands of God and he will fight and he will deliver.”

He had initially told iWitness News outside his home that he had no comment to make.

“This is a spiritual warfare,” Mr. Morgan had said two years ago.

“No comments. There is nothing about that video. You all have to put up the whole thing,” said Mr. Morgan, a former teacher who now works in the Ministry of Culture.

Mr. Morgan has continued during the trial with the religious zeal he has exhibited since the incident.

After his arraignment on April 22, 2016, he told journalists that he hopes they give 10 per cent of their earnings from the story to the church.

And, during their last court appearance on April 13, 2018, the Morgans hired their own camera crew to photograph and videotape reporters covering the court case.