Accused blame each other during trial for theft of pigs 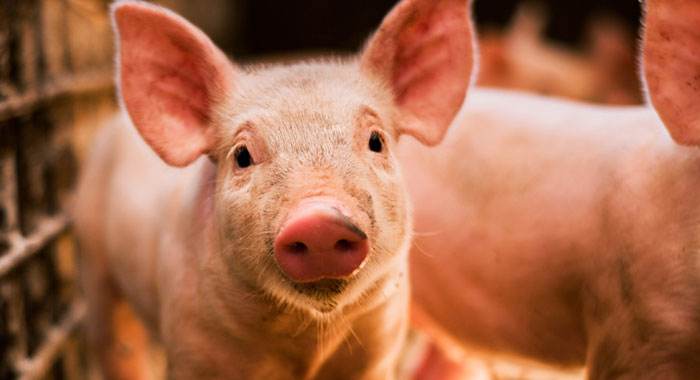 Two men charged with stealing nine pigs, value EC$4,500, from a farm in Mt Wynne attempted to portray the other as the instigator as they faced judgment for their crimes before Senior Magistrate Rickie Burnett on Monday.

Raymond Henry, 36, of Questelles and Kenny Gordon, 30, of Campden Park were arraigned at the Kingstown Magistrate Court on Monday.

The court heard that Beverly Reddock, a businesswoman of Kingstown, has a pigpen with 26 pigs at Mt Wynne.

Selmon Solomon of Barrouallie takes care of the pigs.

On April 21, Solomon secured the pen and left for the day. The next day, about 6:30 a.m., he found that nine of the pigs were missing.

The police were notified and their investigation led to Henry, who implicated Gordon.

They both took police to Fairbairn Pasture, where eight of the pigs were recovered. The other pig was recovered in Questelles.

The defendants gave police a statement admitting to the offence and were charged with theft.

Henry, a tyre fitter, told the court that Gordon approached him around 6 p.m. on April 21 saying that he had some pigs to transport.

He said that Gordon told him that he would, however, like to move the pigs around midnight.

He, however, said he went with Gordon to Mt Wynne for the pigs and took them to Gordon’s house in Campden Park.

“If a man is going to take you to a place at midnight to remove nine pigs, what would go through your head? Tell me,” the magistrate asked Henry, who had earlier told the court that he and Gordon know each other.

“I don’t know if he theifing (stealing) them,” the magistrate said.

Henry told the court that Gordon had gone onto his phone and said, “All right, Tanty.”

“That’s why I believed him,” he told the court.

Meanwhile, Gordon, an omnibus conductor, said he was sitting with a woman around 6 p.m. when Henry came by driving a vehicle and he asked him for a ride.

He said that during the ride, Henry told him that he was “going to handle a mission”.

Gordon said that later the night, Henry came saying he had a jeepload of pigs that he needed to “stash away”.

He told the court that because he was in a tough spot financially, he decided to assist Henry by placing the pigs in a room, but told him he had to come back before 4 a.m.

Gordon said that Henry returned around 4 a.m. and he helped him place the pigs in the jeep.

He said he reluctantly went with Henry and on the way to Fairbairn Pasture, Henry said he was too tired to drive.

Gordon volunteered to assist in driving the vehicle and they took the pigs to Fairbairn Pasture.

Initially the men had both pleaded guilty to a charge that between April 21 and 22, 2018 at Mt Wynne they stole nine pigs.

And, after hearing their explanation, the magistrate again put the charges to the men, and Henry maintained his guilty plea.

Gordon, when asked to plead, said that he was involved but did not actually steal the pigs.

The magistrate then told Gordon that there is another charge against him. He said that “wisdom” had dictated that he did not put both charges to the men at the same time.

The charge was that between April 21 and 22, Gordon, knowing or believing nine pigs to be stolen goods, dishonestly undertook in the retention and disposal of them for his own benefit.

Henry, however, maintained that Gordon had gone with him to Mt Wynne to steal the pigs.

The magistrate, however, told the men that they are both dishonest, only that they did something different and added that their punishment was likely to be the same or very similar.

The magistrate has repeatedly stated that he has zero tolerance for the theft of agricultural produce and livestock.

Gordon apologised to Reddock for his action and her distress, saying that at the time he was in a “difficult situation”.

“I pray that you will forgive me,” he said.

Asked if he had anything to say to Reddock, Henry said he had nothing to say because it was Gordon who took him to the pigpen and was now trying to take out himself.

He noted that Henry had a previous conviction for the theft of a goat in Questelles. Henry denied having committed that crime, notwithstanding the conviction.

Gordon had been convicted for marijuana.

The magistrate sentenced Henry to nine months imprisonment and Gordon to six months.