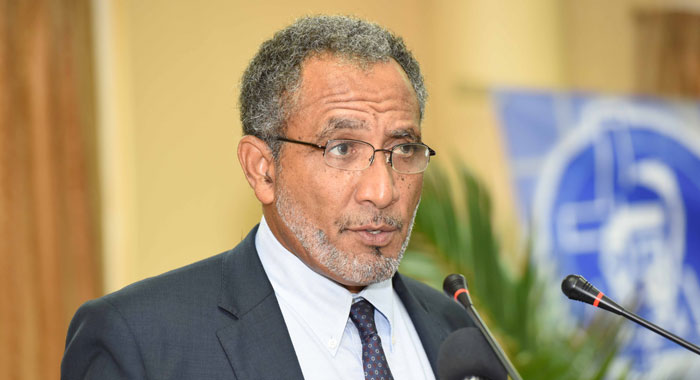 Opposition Leader Godwin Friday says that his Canadian citizenship does not bar him from being a Member of Parliament in St. Vincent and the Grenadines (SVG), but, rather, makes him doubly qualified to do so.

“… the thing that qualifies you to be a Member of Parliament in Section 25 of the Constitution [of St. Vincent and the Grenadines] — and it says it twice, that one statement — is that you must be a Commonwealth citizen of the age of 21. I am a Commonwealth citizen twice over, if anything. I am twice qualified,” Friday said on Monday.

He was speaking during his weekly radio programme on NICE Radio after his return to St. Vincent from a funeral in Canada.

Friday, who was born in SVG, has been representing the Northern Grenadines since he was first elected to Parliament in March 2001.

Over the past few weeks, there have been comments about whether Friday is qualified to hold office.

The discussion came after an opinion piece by pharmacist and political activist Matthew Thomas was published in the local media.

The opinion piece raised questions about whether Friday’s election to Parliament is unconstitutional.

Supporters of the ruling Unity Labour Party have amplified the discussion.

Friday, noting that he has been an MP for 17 years, said: “It’s something that they have suddenly latched on [to] … as some sort of an issue, all of a sudden.”

Also over the past weeks, Searchlight newspaper published an article saying that Deputy Prime Minister Sir Louis Straker had shown them proof that he renounced his US citizenship in 1994 — before he was first elected Member of Parliament for Central Leeward.

Supporters of Friday’s New Democratic Party have been raising questions about whether Straker was qualified to be a Member of Parliament in SVG.

Among other things, they noted that Straker’s name did not appear on the register of persons who had renounced their U.S. citizenship.

The SVG constitution is generally understood as baring nationals of the United States and some other countries from becoming Members of Parliament in SVG.

However, the ULP has argued that persons born in the United States of Vincentian or commonwealth parents, unlike naturalised US citizens — by virtue of the fact that they have to swear allegiance to the United States — can become Members of Parliament in SVG.

“The two things have no real relationship. They are completely different things,” Friday said of Straker’s status in the United States and his (Friday’s) in Canada.

He said that when it comes to voting in elections and becoming Members of Parliament, the Vincentian Constitution recognises one citizenship: “Commonwealth citizenship.”

Section 25 of the SVG Constitution, under the rubric “Qualifications for representatives and Senators”, says, “Subject to the provisions of section 26 of this

Constitution, a person shall be qualified to be elected as a representative if, and shall not be so qualified unless, he is a Commonwealth citizen of the age of twenty-one years or upwards, … has resided in St. Vincent for a period of twelve months immediately before the date of his nominations for election or is domiciled and resident in Saint Vincent at that date”.

The section also speaks to proficiency in the English language.

Among other things, section 26 of the Constitution, which addresses “Disqualifications for Representatives and Senators”, says:

“No person shall be qualified to be elected or appointed as a Representative or Senator (hereinafter in this section referred to as a member) if he is by virtue of his own act, under any acknowledgment of allegiance, obedience or adherence to a foreign power or state…”

Some persons have argued that Friday, in order to become a Canadian citizen, had to pledge allegiance to that country.

But Friday countered that argument, noting that the pledge of allegiance he took in Canada was to Queen Elizabeth II, who is also head of state in SVG, and the same person to whom Vincentian parliamentarians have been pledging allegiance.

“I swear allegiance, whether you like it or not, to the same person: to her Majesty The Queen,” he said.

‘all sleight of hand’

The opposition leader dismissed the debate over his citizenship as “all sleight of hand”.

Friday said that his passport is not as important as his birth certificate.

“I was born here in St. Vincent and the Grenadines. My navel string buried in Bequia,” he said, adding, “I grew up in Bequia…