Awards for SVG’s best footballer of 2017 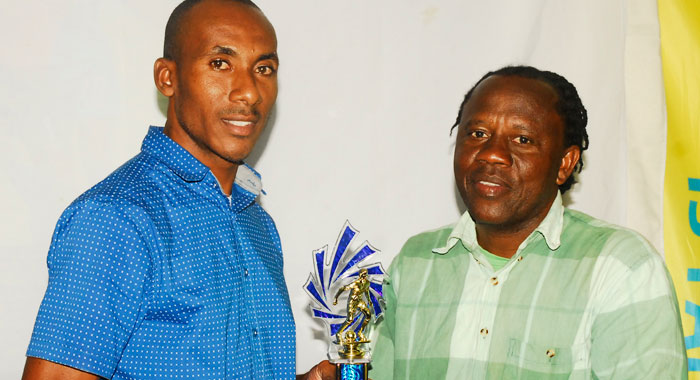 Dwight Baptiste, Coach of the Year 2017.

At its 2017 National Football Awards Ceremony on Wednesday, the St. Vincent and the Grenadines Football Federation, recognised the achievements of a number of outstanding players and administrators.

Dwight Baptiste of Owia United Club and North Windward League team was voted the Coach of the Year 2017, while Avenues United FC and Central Kingstown League captured another award, this time the Manager of the Year award, which went to Marvin Fraser.

Additionally, on the night, a number of teams were presented with their trophies won during competitions in the year under review.

In the National Community Inter-League, East Kingstown won the Under-11 Division, Layou the Under-16 Division, and the Under-18 Division was won by Central Kingstown.

System 3 won the Under -11, the Under -15 Division, and the Women’s Division in the 2017 National Club Championship, while the Under-19 and Premier Division titles were won by Avenues United FC.

During Wednesday’s presentations to the top three teams in each division, cash prizes totalling tens of thousands of dollars were distributed along with the various trophies won.

At the ceremony, president of the St. Vincent and the Grenadines Football Federation, Venold Coombs, spoke of the many achievements of the federation, the strides made and standards set in youth football development, assistance given to football players studying abroad, the increase in regional and international engagements, and the aim of the organisation to take the administration of the sport to improved levels.

The simple ceremony was held in Conference Room 2 at the federation’s headquarters in Kingstown.

The hosts were Janielle Browne, the public relations officer and secretary of Avenues United FC, and the and acting General Secretary, Devron E. Poyer.

One reply on “Awards for SVG’s best footballer of 2017”