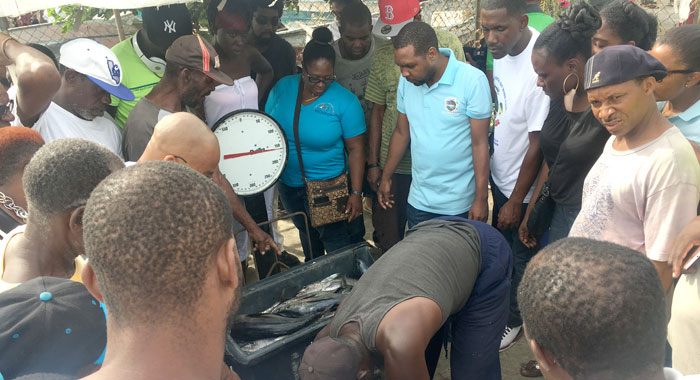 Persons usually use the opportunity to cash in on bargains at the annual fishing competition. (iWN file photo)

The prize-giving ceremony for the annual Fisherman’s Day celebrations, slated for Calliaqua on Monday, was postponed — the second time in as many years.

Heavy rains that flooded the Calliaqua Playing Field forced organisers to postpone the event to this coming Friday.

Some persons waded through ankle deep water on the playing field and technician had to used tarpaulin to shield the sound system from torrential rains.

“We will still be having our party,” she told the gathering during a break in the heavy downpour.

“We are asking the general public to still support the fishers…” she said and thanked the persons who turned up to the event.

“We are very, very sorry and we apologise. You know we have no control over the weather conditions. … we know we have our vendors, they came prepared to sell, we know we have to do the commercial bit of it. So, we are asking you to stick around, support the fishers,” Cruickshank-Howard said.

Forecasters had said at noon on Monday that a trough system was affecting St. Vincent and the Grenadines.

The forecast had been for partly cloudy to cloudy skies with some scattered showers and possible isolated thunderstorms.

Officials also decided to postpone the event because they were able to weigh and otherwise process in time some of the catches landed that day as part of the competition.

Last year, the prize-giving element of the annual Whit Monday event was postponed because six persons on board a go-fast boat that had gone missing the previous day had not been found.

The boat had been traveling from Canouan to Mustique when one of its occupants had telephoned someone in Mustique saying that it had been leaking.

The boat or its occupants were never found.