‘No specific role for women in forcing political change’ 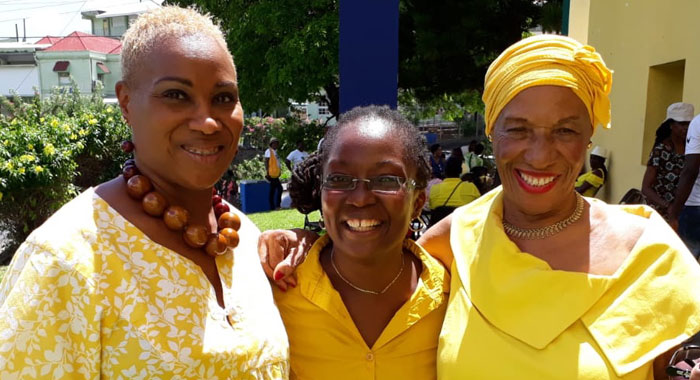 A Barbadian academic and activist has told the Women’s Arm of the main opposition New Democratic Party (NDP) in St. Vincent and the Grenadines (SVG) that there is no specific role for women in forcing political change?

“Let us always be reflective enough and conscious enough to recognise patriarchy, to recognise the system of male domination that starts based on the premise that woman is different from, and in that difference, less fit for or unable to perform in political spaces,” Marsha Hinds said Sunday as she delivered the keynote address at the annual convention of the NDP’s Women’s Arm in Kingstown.

Hinds was one of three women who protested against Prime Minister Ralph Gonsalves as he delivered a lecture at the University of the West Indies in Barbados in February.

In Sunday’s speech, she called on NDP women to “guard against feeling we need to make justification for wanting to be equally included in spaces such as political parties and governance”.

The University of the West Indies lecturer said that women must guard how they “embrace the notion of difference even when — especially when — it comes to us clothed in fine garments and bearing flowers, with the invitation to take up ‘specific or special tasks’”.

If women accept that there is a role specific to women just because they are women in the political process, “then we could be providing support for the current separations in political labour that we now have in St. Vincent and the Grenadines and certainly in Barbados where I was born,” Hinds said.

Hinds said that she does not accept that there is a specific role for women to play in political change.

“I just believe that women have the same and equal role as men in political change because we are both human capable and able to do the exact same things in the political sphere as men.

“So there is no specific role for us — just a role. Indeed, I believe that if we understand we have a role and that our role is often purposely blocked by men, like Ralph Gonsalves, then women must become — should become — far more mobilised, far more militant and political as a precursor and facilitative mechanism for political change.”

She said that for too long, Caribbean women have been cloaked by a glass ceiling in their experience of life.

“It is an interesting misnomer in Caribbean women’s lives. I say this because in the black race group, the group that comprises the majority of Caribbean women, women have been outside forever. We were never only inside the house. We have always worked alongside men. From plantation days when women toiled alongside men. were beaten like men, women operated outside and in perceived male spaces. We have been political entities forever. Woman was always a powerful force in the Caribbean, in not specific roles but all roles. We were never only home or inside or removed from politics.

“Let us not allow our history to be rewritten for the narrow purpose of a few misogynists or women haters. We must call them out, Ralph,” she said.

Hinds said that the NDP’s women’s arm must be invested in change for SVG, “because based on my vantage across the water, I think St. Vincent and the Grenadines could benefit from political change and renewal.

“The NDP must ready itself. Personal agendas must bear no place in decisions. The team moving forward must be a mix of the best men and women available.

“I hope the hills of St. Vincent are alive with the seed of change. And if they are, then change should the people have,” she said.