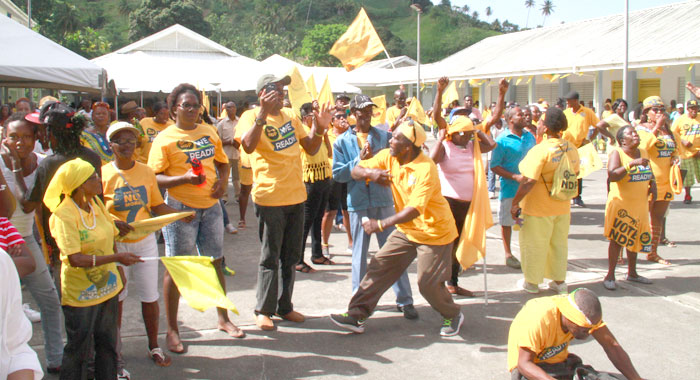 NDP supporters at their convention rally in Greiggs on Sunday. (iWN photo)

After its ‘casket-sharp’ 17th anniversary rally at Calliaqua, the ULP tried to regain some momentum by attempting to bring into focus, Friday’s legitimacy as a candidate. The old strategy of when you can’t beat the opponent through fair competition, seek a disqualification, but that too was a dismal failure.

They were hit for six.

I was stunned while listening to what many have crowned the number one talk show in the country right now — Night Nurse. I was stunned to hear a recording of the ULP’s leader in his own voice essentially claiming that Commonwealth citizens, which include persons like Friday, are duly qualified to run for political office. This, after many of their supporters went over an “embankment” with the argument; so that attempt at regaining the national discourse quickly faded. That attempt — the usual smear campaign — brought Friday into zoomed focus, and the NDP ran away with the national discourse.

When that didn’t work, we heard of a lawsuit against NICE Radio. Once again, it is the old strategy of trying to disqualify opponents that you can’t compete with. That discourse didn’t last for long. It was NDP again, dominating the national discourse, once it had announced its conventions. We barely noticed that Mia Mottley had swept the Barbados elections. Everywhere is NDP; so where does the ULP go for relevance? Several persons have called on them to lead the way in standing against the abuse of females in the country. That is one way to regain national relevance, but we shall wait and see what happens in that regard.

Having said all of this though, it is left to be seen if the NDP can translate its national dominance into execution at the polls.