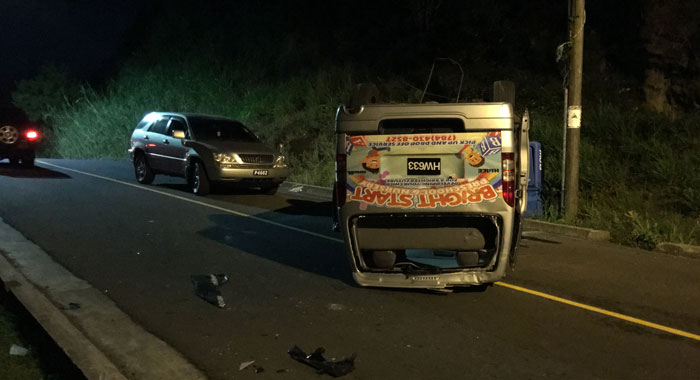 The van overturned in the road in Chauncey Friday night. (iWN photo)

The driver of a car who assumed that the wreckage of a overturned van had been moved hours after the accident occurred crashed into the wreckage, knocking the van driver unconscious.

The curious series of incidents occurred Friday night in Chauncey, along the South Leeward Highway.

Reports are that HW633, an omnibus, overturned when it hit the curb near the Chauncey-Clare Valley junction while travelling towards Kingstown.

The driver of P7335, a car, was among onlookers at the site of the overturned vehicle soon after it the accident occurred.

However, the driver of the car left the scene and travelled to Central Leeward but crashed into the overturned van while travelling to Kingstown several hours later.

The overturned minivan was in the road just beyond the crown of a small hill, making it impossible for oncoming traffic to see it from a distance.

No warnings were erected after the accident.

Reports are that the driver of the minivan was attending to the overturned vehicle when the car crashed into it sometime around midnight.

After the crash, the driver was found lying unconscious in the street and was rushed to hospital.

His condition was not known at the time of publishing this story.

The car sustained some damage to the left bumper and fender as a result of the crash.