House gutted by fire as violence continues in Layou 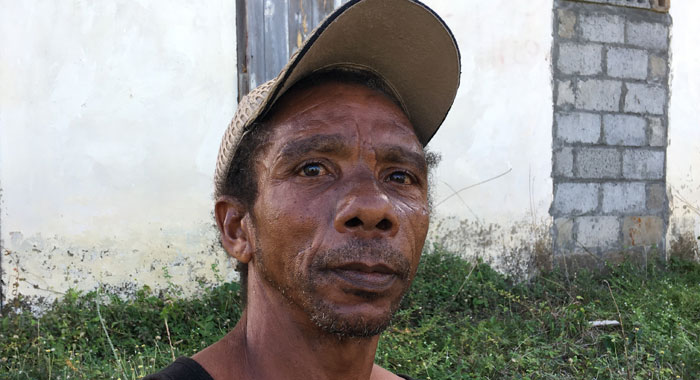 Bertram Lyscott lost his home to the blaze. (iWN photo)

A Layou man whose house was gutted by fire Friday night is wondering if it is part of the violence that has seen several persons shot in Betromy recently.

Bertram Lyscott, 50, lost the 12 x 18 foot wooden house that he has called home for the past 27 years, after a few years of homelessness.

He told iWitness News on Saturday that he was at a shop sometime before 8 p.m. when someone told him the house was on fire.

When he got close to the blazing house, he heard an explosion, which he concluded was the gas cylinder.

“It’s a board house. An old antique too. I don’t know who burn it or whatever.

“How the area running with gun shots in this ghetto, I don’t know,” he said, adding that while he can’t accuse anyone in particular, he believes that the house was set afire.

“I was not cooking or anything like that,” he said, adding that the house does not have electricity and there was no lit candle or lamp inside

By the time the fire truck  — which reportedly was involved in an accident in Buccament on its way to Layou – arrived from Kingstown, the fire had destroyed the house.

“I lose everything,” Lyscott said.

He said he could not say definitely that the fire was related to the shootings in the area.

“Thursday, police came and search up say I hold gun for [people], but I don’t know about that. And look, Friday night my house light afire,” he said.

Now that the house was destroyed he is back on the street, Lyscott told iWitness News.

“I been on the road stranded a couple years. So a good friend, since his old lady died, he gave me the house to live in,” he said, adding that the house has provided accommodation to many over the years.

“I have no clothes or nothing,” Lyscott further said as he lamented his loss. He said that while the house was small he had a lot of good quality clothes and 21 pairs of shoes, many of which were sent to him from overseas.

Lyscott was referring to calypsonians Fitzroy “Brother Ebony” Ebony who sang a song, “Nothing At All” in 2012, in which he outlined that he has nothing to show for his years in the art form.

In early June, a resident of Layou expressing concern to iWitness News over what he described as “a spate of shootings in my once peaceful community of Layou.”

“I feel something bad is brewing in my home [town] of Layou that will eventually result in death because I don’t feel these shootings are mere coincidence,” he told iWitness News.

At least five persons have been shot in Layou since March 14, in what residents of the town believe are reprisal acts of violence.