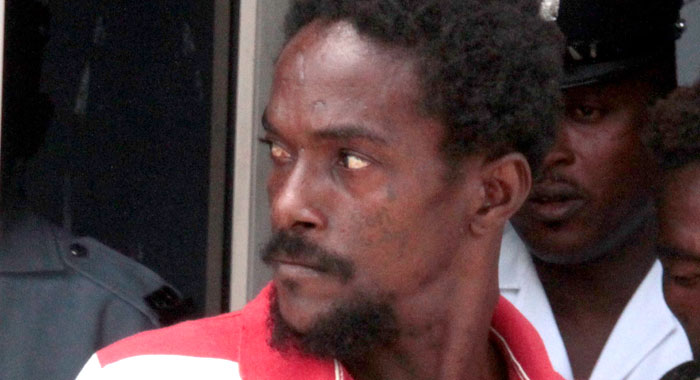 During the preliminary inquiry, Zarri Layne had maintained that he saw the accused shoot the virtual complainant. However, during the trial on Monday, he said that he did not see anything. (iWN photo)

A Sion Hill man is facing the possibility of up to seven years in jail for giving conflicting witness statements to the court.

Zarri Layne, 38, pleaded guilty, on Wednesday, at the Kingstown Magistrate’s Court, to a charge that he gave a conflicting statement at the High Court on Monday, July 2.

However, Senior Magistrate Rickie Burnett adjourned his sentencing to July 16.

The magistrate took the decision to allow prosecution an opportunity to inform the necessary authorities that Layne had indicated that he changed his testimony because he feared for his life – something he had not told the High Court.

Layne was granted EC$3,000 bail with one surety.

The court heard that Layne is a witness in the case in which Emron Jones of Sion Hill is charged with the attempted murder of Enrico Jack of Lowmans Leeward as well as possession of an unlicensed firearm and unlicensed ammunition, criminal assault and wounding.

Layne gave police a written statement that he had seen Jones shoot Jack and had outlined to police that the incident had lasted about 10 minutes.

He maintained that statement during cross examination during the preliminary inquiry, which was conducted by then Chief Magistrate, Sonia Young.

Under cross examination, when the defence counsel put it to Layne that he had not see what had allegedly happened, he responded, “Yes, I saw with my own eyes.”

However, on Monday, as he gave evidence in the trial at the High Court, before Justice Brian Cottle, Layne changed his statement and said, “Me nah see ye man face.”

After Layne left the stand, the police approached him and informed him of the offence of giving conflicting statements as a witness.

He was arrested and cautioned and admitted to the offence.

Layne told the Kingstown Magistrate’s Court that he is unemployed but was to begin a job with Minister of Health, Sen. Luke Browne as a labourer at the Modern Medical and Diagnostic Centre, which was opened in Georgetown on Monday.

The man, however, said he had to forgo the job to testify in the High Court matter.

He said he changed his statement because he “got scared” and it was the first time that he was testifying before the High Court.

“I got scared for my life,” Layne told the magistrate, but said he did not tell the judge this on Monday.

Grant Connell, who was at the bar table at the time, but was not involved in the matter, told the court that in the interest of justice, it might be helpful to get a transcript of what had transpired.

Connell said that the proper procedure by the Director of Public Prosecution would have been to apply to the court to treat Layne as a hostile witness.

The magistrate, however, said he was not in a position to say whether that was done.

Burnett further said that he was sure that had Layne told Justice Cottle that he was scared for his life, he would not have been charged.

Connell further said that he was surprised that Layne was charged with such haste, adding that there is another section of the law under which the DPP could have gotten evidence from the man.

“You don’t expect me to comment on that,” the magistrate told the lawyer. He further said that he would allow the prosecutor Police Constable Corlene Samuel a chance to relate to the authorities what Layne had told him.

The magistrate noted that Parliament has fixed a penalty of seven years for Layne’s offence, suggesting that it is very serious one.

The trial in which Layne was a witness continues at the High Court.

One reply on “Man charged for giving conflicting statements in court”