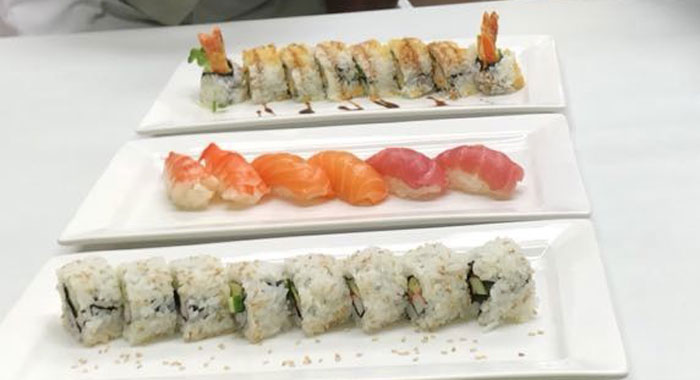 The food scene in St. Vincent and the Grenadines will receive a major shakeup soon, as a result of collaboration between Chef Akah of H20 Foods and Jacqueline James-Lyttle, co-owner of one of SVG’s leading hotspots, Chill’n.

Chef Akah, who was voted the Best of SVG Chef in 2017, specialises in ethnic cuisine and created four foodservice entities, the Assorted Grill brand which focuses on Sushi and other Asian delights, being the most popular.

On the other hand, Chill’n, which was launched in December 2014, has grown to be one the more popular restaurant, bar, and lounges in St. Vincent and Grenadines and was recently listed in second in LIAT’s inflight magazine’s list of the Top 5 places in SVG to eat and lime.

“With its renewed emphasis on a better experience for its customers, which has resulted in service upgrades over the past few months, the move towards including Asian cuisine, which is increasingly popular across the world and in SVG, is a natural and timely one designed to bring a refreshed feel to the Chill’n brand,” a press release said.

The release said that research indicates that SVG’s consumers are seeking something different and though they are lovers of Asian food mostly due to its bold, flavourful taste, many yearn for authenticity.

Akah brings that authenticity with his years of experience and training to lead the Chill’n culinary team, having been the sous and sushi chef at the Buccament Bay Resort as well as a graduate of the Sushi Chef Institute in Torrence, California with Sensie Andy Masada and his staff.

Taste of Asia, the Asian menu theme and concept at Chill’n, brings the introduction of an Asian dinner menu, which will include entrees such as General TSO Chicken and other meats as well as appetizers, including wings with an Asian inspired sauce, spring rolls, samosas and, among other things, cajun wedges.

Meanwhile, Lyttle said that when Chill’n was originally conceptualised, it was always the intention to bring a lounge feel in the evening.

With the Taste of Asia dinner offering combined with the upgraded cocktail and drinks selection, customers can expect a new refreshing after work/evening experience.

Chill’n will still continue to offer its popular signature desserts, breakfast, patties, pizzas, burgers, sandwiches and wraps as well as happy hours, which was nominated in the 2017 and 2018 Best Of SVG Best Happy Hours category.

4 replies on “Chill’n brings ‘Taste of Asia’ to SVG”