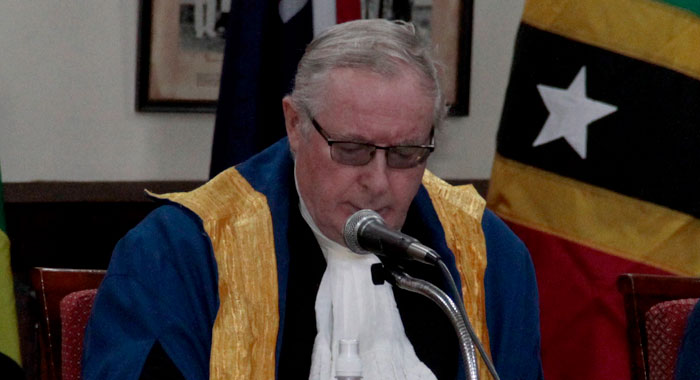 UK-born judge, Justice David Hayton, speaking at the ceremonial sitting of the Caribbean Court of Justice in Kingstown last Friday. Opposition senator Kay Bacchus-Baptiste said some of the judge’s comments were an “insult”. (iWN photo)

Justice David Hayton, a UK-born judge on the Caribbean Court of Justice (CCJ), has come in for criticism over comments he made during last Friday’s ceremonial sitting of the court in Kingstown.

Opposition senator, Kay Bacchus-Baptiste, who is also a lawyer, on Monday criticised Hayton’s over his quotation of Bob Marley’s “Emancipate yourselves from mental slavery, None but ourselves can free our minds” and his larger point about the anti-CCJ position of some political parties in the region.

Bacchus-Baptiste pointed out that Hayton is  “a white man — not a Caribbean man” and said that his reference to Marley’s “Redemption Song”, “In a way, it is an insult to our people.

“Our people are emancipated enough to know that we do not agree to something simply because it gets rid of the white man. We do not agree to go to the CCJ because you would be saying, ‘Oh, we are free; we have gotten rid of the white man’s court. We are emancipated enough to know that. So, to say that the reason why all of the OECS, … and the Caribbean save Dominica and Barbados, have not made the CCJ the final court, it is a real, real reason,” Bacchus-Baptiste said on Boom FM on Monday.

Thirteen years after the establishment of the CCJ, only four CARICOM nations — Barbados, Belize, Dominica and Guyana – have replaced the Privy Council’s appellate jurisdiction with that of the CCJ.

When given a chance to do so in a referendum in 2009, the Vincentian electorate rejected such a change, among other proposed amendments of the Constitution left by the British at Independence in 1979.

The Privy Council-CCJ debate has been given new life with the elevation of Vincentian jurist, Justice Adrian Saunders to its apex in its third presidency.

All of the previous presidents of the court have come from countries that have not signed on to its final appellate jurisdiction, including Trinidad and Tobago, where it is headquartered.

In his comments on Friday, Justice Hayton said many have said that too many political parties are narrowly focused upon staying in power or regaining power and so will do whatever is necessary for that purpose.

“A cynical commentator has remarked that British colonialism was too successful in generating an inferiority complex in many Caribbean countries, so that British jam, British baked beans and British justice are considered much superior to local equivalents.”

He said that if a party, therefore, wishes to replace the British Privy Council with the CCJ, the other party may be inclined to “prey upon the anxieties and insecurities of the populace by opposing such a move in the hope this will enable it to find favour at the polls with the majority of the electorate, though the answer to this can be found in the words of Bob Marley’s Redemption Song, ‘Emancipate yourselves from mental slavery, None but ourselves can free our minds.’”

Justice Hayton said that a further point relates to “uninformed or misinformed allegations that the CCJ may be prone to corruption and being influenced by politicians.

This is rubbish and is as likely as the Pope becoming a cannibal. We CCJ judges, like judges of any other apex court, are the archpriests of the law and to doubt the integrity of this court for the sole reason that its judges are, for the most part, from the Caribbean is utterly nonsensical and reveals a measure of self-depreciation which is unfitting for a region rich with culture, academics and prominent jurists who have served in high positions all over the world.

“We judges have devoted our lives not to making money as attorneys but to developing the law so that citizens can have fulfilling lives in a democratic society where the rule of law prevails.”

Justice Hayton said CCJ judges are interviewed, appointed, and removable for cause only, by “the very independent Regional Judicial and Legal Services Commission, while the CARICOM States have already paid over the US$100 million Trust Fund intended for the financial sustainability of the CCJ.

“Having paid for the CCJ, it makes no sense for such States not to make full use of it, thereby becoming truly independent states, providing easier access to justice to their citizens, and having the CCJ as the apex court in the heart of the Caribbean, working closely with local judiciaries in order to improve the delivery of justice throughout the region.”