Opposition Leader ‘alarmed’ by ‘spate of violent killings’ in SVG 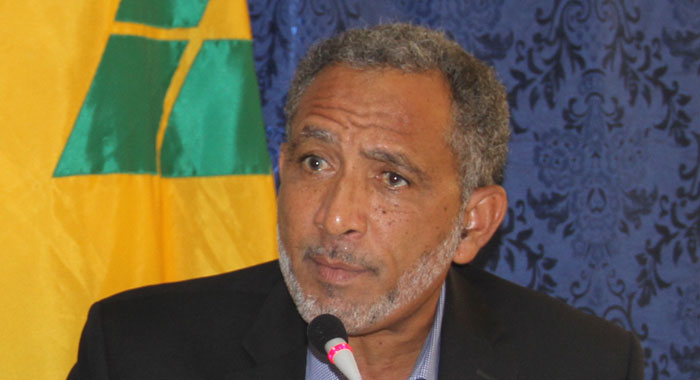 Leader of the Opposition, Godwin Friday, on Tuesday, said that as president of the New Democratic Party and a citizen of St. Vincent and the Grenadines, he is “alarmed by the most recent spate of violent killings in our country”.

He further accused the government of dismissing some of the deaths as killings that law-abiding citizens need not worry about, as they result from criminals settling scores.

Friday noted at a press conference in Kingstown that SVG has recorded 16 killings for 2018.

He said that the recent “spate of four killings” in one week has created even greater alarm, which prompted NEWS784, a website, to exclaim in a headline: “Death Spree! Four in A Row”.

The opposition leader noted that the most recent killing occurred on Friday, when Billy Adams was shot and killed in Layou.

He further said that the previous week was a bad one, with the killings of Lorenzo Gould of Vermont and Marcus Sandy of Arnos Vale, who were shot to death in separate incidents.

Adams was killed two days after the murder of Malachi Kingman of Calder, who was shot in his house.

Friday said:  “This state of affairs is not just worrying; it is alarming.  The seemingly endless reports of killings and serious wounding are creating feelings of fear and insecurity among ordinary people in the country. The government must take responsibility for this alarming situation.”

He pointed out that 2016 and 2017 were record-breaking years for homicides in SVG, with the country recording 40 homicides in 2017.

The opposition leader noted that at the Consultation on Crime and Violence held by the Christian Council earlier this year, he said, “We can only hope that in 2018, this record-breaking trend does not continue.”

“That is still my hope today. But the evidence, of far too numerous recent killings is not encouraging.

“Moreover, there is the tendency within the present government to treat certain reports of gunshot killings as a special type of criminal activity spawned by gangs and individuals caught up in a retaliatory frenzy, with the view that we, the rest of society, need not concern ourselves too much with them.”

“That approach says, that if we, the law-abiding people, walk on our side of the road, we will be safe from the violence and need not fear for our lives.”

Friday said that this is “foolish thinking”.

“Just ask Carlyle Douglas of NICE Radio fame, who was in his house, standing on his porch, on the night of Wednesday July 18th, when he was shot in his groin area and had to be hospitalised.  Fortunately, he survived the incident. But, since he was shot and wounded he could just as easily have been killed.”

Friday said that his point is “crime is crime, violence is violence, no matter the source and the identity (or suspected identity) of the people involved.

“We cannot leave it up to the ‘criminal’, so-called, to clean up the streets by wiping out one another. That is chaos and emerging anarchy in our country.  Those approaches are familiar in larger more violent societies such as areas of Mexico and Venezuela, where the government has lost control of the streets and criminal gangs fill the breach.”

The opposition leader called on the government, particularly the Minister of National Security, “to be proactive in fighting crime and violence in the country and to live up to its campaign promise to be ‘tough on crime and the causes of crime’”.