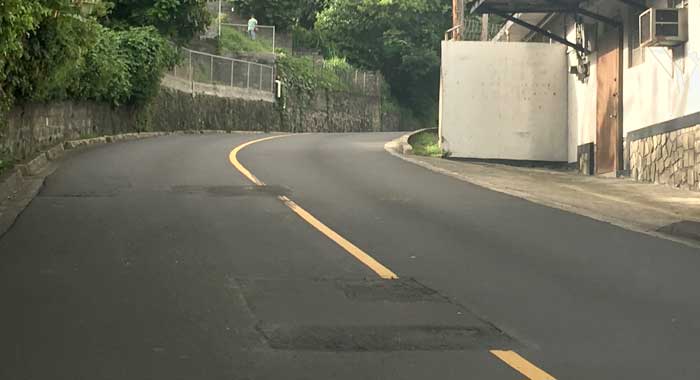 A faulty section, at New Montrose, of the Nelson Mandela Highway. (iWN photo)

The EC$8 million or so that the government has remaining after the completion of the Nelson Mandela Highway, previously the South Leeward Highway, will be used to fix by-pass roads used during the rehabilitation.

Minister of Works, Senator Julian Francis said that the road was rehabilitated at a cost of some EC$26 million, about EC$8 million less than was sourced from the Caribbean Development Bank.

“The works are not complete, so I am not adding up the dollars and cents yet.  The permanent secretary is here and by the time we are finished, he will give me a total. I look at works, I don’t look at money,” he said in Chauncey earlier this month.

“There’s an extra $8 million worth of works. We have done works before and they have said that we have cost overrun. On this project, we can say, if I want to coin it, we had works under run.

“In fact, we had surplus money from the money that we borrowed to be able to do and rehabilitate all the other byroads that we have been using during the construction period, including Chauncey to Clare Valley, Clare Valley to Campden Park, Montrose, and I am going to add the piece from Rillan Hill into Hope,” he told the July 19 ceremony in which the highway was renamed.

He said there are small works left to be done on the highway, including the building of bus stops.

“And there is a burning issue between Gibson Corner and hospital where we have recurring potholes. Just last week, I had a very firm discussion with the consultants and suggested to them that if they couldn’t find a solution to those potholes, that we are going to have CDB hold their monies until they find a solution or we find a new consultant,” Francis said.

The remainder of the highway triggered some discussion among Vincentians about why the highway was being remained in honour of the former South Africa president, while local icons were being overlooked.

Francis said he was pleased to have been listening in the previous two days “to a high level of patriotism” in St. Vincent and the Grenadines.

“One person called me and said there was a discussion on radio and there was some objection to the naming. And I initially thought that it had to do with the potholes between Gibson Corner and Hospital Road, prime minister,” Francis said at the ceremony, which also heard an address from Prime Minister Ralph Gonsalves.

“I thought that the people were saying on the radio that how could we name a piece of road like this under such an individual, Nelson Mandela and had potholes on it. So, I immediately called BRAGSA and Dipcon and asked them please to fill the potholes. When I realised that it wasn’t the potholes, there was some other objections, I decided to leave the potholes and not to fix them until afterwards,” Francis said.

3 replies on “Excess money from highway to fix bypass roads”