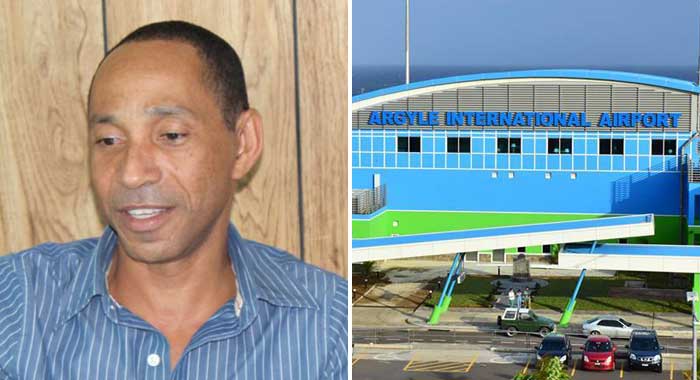 Ricardo Drayton (searchlight photo) says his company, Vincy Aviation Service has been overlooked for the running of a fixed-base operation at Argyle International Airport.

A Vincentian Aviation Company has expressed surprised that the government has permitted a foreign firm to operate a fixed-based operation (FBO) at Argyle International Airport (AIA), while overlooking them for the same type of service.

“… this gives me a very, very bad feeling… This is about giving local companies a chance to do well, and if we are not capable, fine. But we are not being given the opportunity and that is where the problem is, and that is my argument here today,” Ricardo Drayton, managing director of Vincy Aviation Services, said on Hot 97 FM on Tuesday.

On July 28, Argyle International Airport (AIA) signed a memorandum of understanding (MOU) with Kayan Aviation Holdings, owned by Saudi businessman, Uday Nayak, for the construction of an FBO and a commercially important people (CIP) lounge at AIA.

Kayan Aviation Holdings, which owns and operates an FBO in St. Kitts, would be making a US$7 million investment at AIA, according to Prime Minister Ralph Gonsalves.

On the other hand, Vincy Aviation Services, also known as Caribbean Aviation Management is a Vincentian company, which says it t provides general aviation services to many international clients including some of the world’s largest private jet companies, from offices at AIA.

The company recently renewed a lease agreement with the airport for office space at AIA and employs 25 Vincentians in its local operations.

In a press statement on Aug. 7, Drayton expressed “serious concerns” about the announcement.

During the announcement, Hadley Bourne, CEO of AIA said he was holding Nayak’s company to their commitment to have the CIP up and running by the winter season.

Drayton said this is “likely to put Vincy Aviation’s local operations out of business at Argyle and will also seriously affect their business at Canouan Airport.

“The director and staff were surprised by the announcement, especially since over the last three years, Vincy Aviation has tendered for and discussed at least two separate proposals for the development and provision of FBO services at Argyle.”

He also expressed his frustration that despite his company’s provision of quality Aviation Services in SVG for the last 18 years, “Vincy Aviation continues to be overlooked for important aviation and cargo projects such as the FBO Operation and the cargo terminal management at AIA.”

In his call to the radio station on Tuesday, Drayton said that the AIA terminal contains 3,813 square feet of space for a CIP and an additional 1168 square feet.

“This is an area that we discussed possibly operating in early 2017. The rate that we were given there was rate of US$4 per square foot,” he said, noting that at this rate, the rent would have been EC$64,000 per month.

Drayton said that his company has been trying since December 2013, when they submitted a tender document, to build and operate an FBO at AIA.

“Basically, we got a reply saying the tender was rejected,” he said, adding that no reason was given.

The discussion continued into 2017 when they made a proposal for a smaller area between the arrival and departure area.

The area was created as a VIP lounge and is 944 square feet.

Drayton’s company proposed to rent that area for EC$4 per square feet.

“We started the negotiations with the airport authorities. Eventually, we got the price down to US$3.75 per square foot.

He said his company proposed to operate the area both as a VIP lounge and as an FBO, adding that this is the same arrangement, IAF, a Barbadian company, has in Grenada.

Drayton said Vincy Aviation thought that the second space at AIA would work perfectly for it, because the authorities rejected their first proposal.

“We had financiers to finance the project, we had everything. Being that as it may, I was not going to take issue with the authority at that point because they thought it was not time to build that facility.

“But the point is this: we have been making all these proposals and we have been constantly told no. This time, we, as tenants of the airport, operating at the airport, were not even given a chance in this latest round, we were not even consulted as to whether or not we were again interested in operating a CIP lounge or whether or not we were interested in going forward with an FBO proposal.

“What we got this time was an announcement on iWitness News that a company was appointed.”

Drayton said that the government has entered into an arrangement with Kayan Aviation although it is “a little-known company in this aviation business”.

He said that on the contrary, Vincy Aviation is very well known and has been in the business for 18 years.

“Every company that matters has and continues to deal with us today. That includes Warren Buffet, NetJets, that includes a Fortune 500 company called World Fuel [Services], who I have had discussions with this year.”

Drayton said giving an FBO designation to another company is a death knell for Vincy Aviation.

“Once the authorities at the airport designate a company as FBO, it kills us, and I think that is what has happened here …

“Once you get that designation with FBO, which we were fighting for years, it means that that company can go on the ramp, they can handle airplanes, they can funnel the customers to their facilities and it means that we, who right now operate at the airport without designation, believe it or not — so we are renting space, but we have no designation at the airport, none, and the way we operate at the operate right now, the income that we make is shared with the airport authority.

“And this is the way it operates: when a private jet comes into the airport, we are only allowed to offer customer service to that private jet. So, the AIA handling company is the company that we have to use to do the ramp services for the jet, and we have to pay them, so this is the agreement that we have.”

He said being an FBO would allow his company “to handle the airplane from the time it lands to the time it leaves and we would have been retaining all the income that we make from the airport”.

Drayton said that the comments by Minister of Economic Development, Camillo Gonsalves, at the singing of the MOU, show clearly that such a destination has been given to the new company, which can now retain all the money without any payments to AIA, besides the landing fees.

Drayton said it is very difficult to understand why the government would give such a designation to a foreign company but not to a local.

“Because, as a foreign investor, clearly, they are going to be negotiating the land at concessionary cost, at peppercorn rent, they are going to get duty free concessions to bring in all building materials and everything else. And so, they will be contributing much less to the economy than if we were doing that operation.”

He said that the situation makes him feel “rejected and frustrated”.

“That is my problem, we make every effort that we can to move St. Vincent forward. Look at the charter that we did. I mean, we did everything to make sure that persons feel comfortable coming back home. Sometimes I feel that people slight us, and they do I not believe that we have what it takes. It is a hard thing to realise.”

“… The thing about Vincy Aviation, we have always been able to regenerate and do other things. I don’t know in a case like this what it would be at Argyle International Airport. But I can tell you that we are not going to go away. And if we cannot be appreciated in our own land, we will, obviously, look at alternatives in other places.”

He said he is sure that the authorities would not be happy with this.

“They are new in this business in St. Kitts, relatively new, their facility is nothing amazing, I have been to St. Kitts, I have seen the facility, nothing spectacular, whatsoever and I can tell you, in St. Vincent and the Grenadines, consistently over the years, we have handled more private jets than that company. I can tell you we have much more experience than them in St. Vincent.”

Drayton speculated about what the government would say to justify its decision.

“They are going to say that the pockets of this guy is so deep that he can do things that we cannot. And I am going to tell you that that would be false, because despite we are a small company in St. Vincent, we have extremely good support, both financial – good, clean American companies, fortune 500 companies who are willing to invest in us.  And when I say clean, it is not a derogatory clean. I am talking about companies that have been tested over time and who continue to be tested over time.”