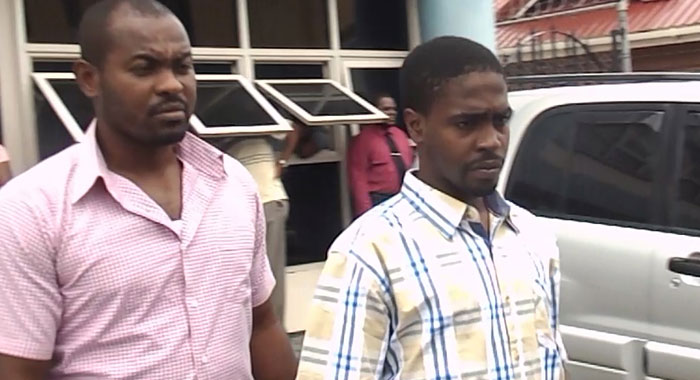 A detective escorts Kesean Cain, left, after his court appearance last week Monday. He has been charged with Layne’s murder.

A 19-year-old Diamond Village man has been charged with murder in connection with the Aug. 22 stabbing death of a woman in Kingstown.

Kesean Cain was brought before the Kingstown Magistrate’s Court where Senior Magistrate Rickie Burnett read the indictable charge to him.

He is charged that on Aug. 22 at Bay Street, Kingstown, with malice aforethought, he caused the death of Brenda Layne, a 48-year-old security guard of Rillan Hill/Chauncey by an unlawful act, to wit, “by stabbing her on the left side of the neck with a knife”.

As is the case with these offences, Cain was not required to plead to the charge.

He was remanded in custody and is scheduled to appear before the Serious Offences Court on Sept. 3, when the date will be set for the commencement of a preliminary inquiry.

Surveillance footage recorded by a business in Kingstown shows a man walking up behind Layne and stabbing her in the neck before fleeing the scene.

The incident occurred at about 6:45 a.m. while Layne was apparently awaiting transportation home.

3 replies on “Man, 19, charged with stabbing death in Kingstown”