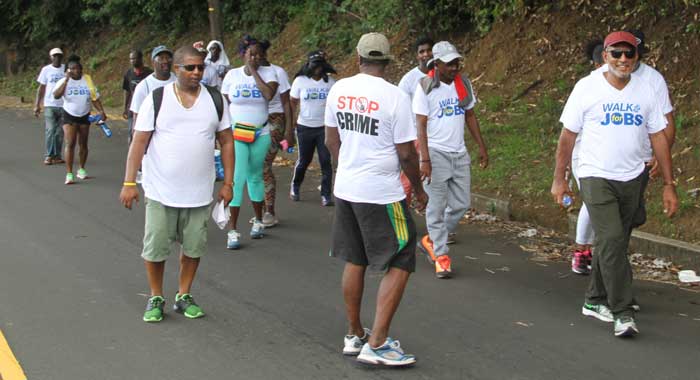 Supporters of the main opposition New Democratic Party on Saturday walked most of the 25 miles from Fitz Hughes to the NDP’s headquarters in Kingstown to highlight crime and joblessness in St. Vincent and the Grenadines.

The walk, which was led by party president and opposition leader, Godwin Friday, is the first of its kind, with another slated from Georgetown to Kingstown — a 22-mile distance – next Saturday.

“We are walking for jobs, that is, to protest the joblessness, especially for young people in this country. We are walking against crime,” Friday told iWitness News in Pembroke around 2 p.m., after the group had walked some 20 miles.

He said the event was an historic one.

“… it is the first time a political party I know of in St. Vincent and the Grenadines has ever organised an event of this sort,” said Friday, who is Member of Parliament for the Northern Grenadines.

“And the reason for doing so is to dramatise and highlight the problems of joblessness in this country and the problem of crime, particularly violent crime.

“We have walked, we have put ourselves, our bodies on the line to emphasise how important we believe in the people in this country — we believe we are in touch with this country — believe that this matter is of national urgency and importance,” Friday said.

The walk took place on a day when the maximum temperature was 30.7 degrees Celsius and relative humidity 70 per cent.

The walk was interrupted by at least one heavy downpour that met the group in Layou.

Friday told iWitness News that the group walked most of the way from Fitz Hughes but drove through the uninhabited areas.

“But most of the distance, we have walked through; we have put our bodies on the line,” he said, adding that the participants were tired as they neared the end.

“… but they are persevering because we want to make the point that this is a matter of commitment. And you can’t show your commitment unless you are ready to complete the journey. We are doing that symbolically today. We have committed ourselves as a political party to do that for the people of St. Vincent and the Grenadines and the first chance we get we are delivering on that.”

Friday said that the reaction to the walk from people whom participants met along the way was positive.

He said even people who didn’t know they were having the walk came to support when they saw the group.

“There is a dramatic story, a very touching story, of this elderly lady who came down. She couldn’t walk in this walk from Fitz Hughes to town and she came and she had five dollars in her hand. She said, ‘Ah cyar walk because me knees ain’t good, but here is $5 to show my commitment and support for what you are doing’,” he said, recounting an incident in the Central Leeward town of Barrouallie.

Friday said the experience was telling and “shows that people understand the urgency and the need for action to be taken and they realise that the government is not doing so, especially on the matter of crime.

“The government is sort of kicking the ball down the road, blaming other people, distinguishing one event from another and saying the opposition is trying to make this matter into fear mongering or scaremongering. This is not the case because the people in the country they are telling us that this is what they are fearful of.

“People we met on the way told me this, that this is a matter they are concerned about. So, this is why we are taking this step to dramatise this issue…”

Regarding the people who argue whether such activities contribute to reducing crime, Friday said these people are “arguing with themselves because I am not arguing with them.

He said that is why people have said and he endorse and says himself, “the prime minister is out of touch on this issue. He is out of touch on many issues but this would dramatise the distance between him and the people he professes to govern.”

At a press conference last Monday, Prime Minister Ralph Gonsalves chanted down the anti-crime, pro-jobs walk, saying if crime in SVG were as bad as the Opposition Leader makes it out to be, Friday would not dare walk against crime.

“Now, if you are truly saying that the criminals have overtaken the country and are overrunning it, you will be asking that the police force come out in their numbers to give you protection along the way and you hire Guardsman, you hire Famo, you hire all the security available because things are so difficult in this country and are so violent and the police are overrun so much that Friday and his men and women can’t walk from Chateaubelair to town, because they’re so fearful,” said Gonsalves, who is also Minister of National Security.

9 replies on “NDP walks 25 miles for jobs, against crime”