Personal security is a perk of the job — PM 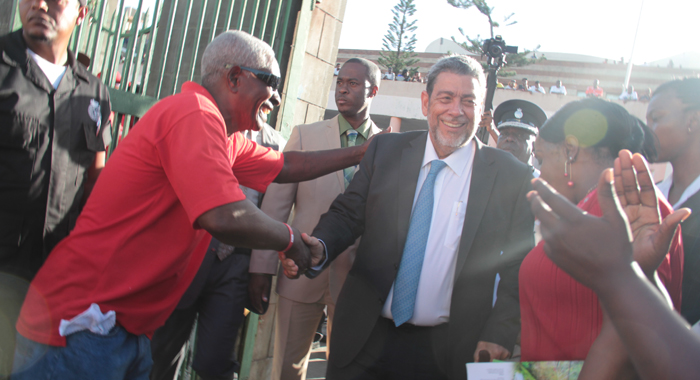 In this January 2016 iWN photo, members of Prime Minster Ralph Gonsalves’ security detail keep a watchful eye as he interacts with persons outside Parliament. Gonsalves said last week that a security detail is a perk of his position.

Prime Minister Ralph Gonsalves has noted, amidst the claims of increasing crime in St. Vincent and the Grenadines, that some persons would note that he has a personal security detail.

“I know that they say that Ralph has a lot of security ’round him, so he doesn’t know. Apparently, what they want is for me not to have any security at all,” he told a press conference last Monday in Kingstown, which acting Commissioner of Police, Colin John also attended.

“Well, you may not like it. I happen to name prime minister and the people who vote for me, they expect that I be properly protected to do the job, which they elect me to do. That’s the reality and I don’t apologise for that,” Gonsalves said.

“But I walk the street too and I know what’s happening and I am more grounded than them. That’s why I continue to win elections and they can’t win them. And, as I always say, they provoke me, they have to face me again at the head of the ticket next time because they are — I am not saying that will happen. I am just saying they provoke me,” Gonsalves was speaking in response to opposition criticism of his government’s handling of crime in the country.

“So, let us keep the language, please, measured,” he said, having accused opposition Leader Godwin Friday of being irresponsible when he said criminals have taken over SVG.

“And I never forget, these paragons of law and order they went to a church in a funeral in Georgetown and mash up the church service,” Gonsalves said, referring to the intense booing he suffered when he attended the funeral of former NDP spokesperson, Elwardo Gideon “E.G.” Lynch.

“They weren’t reproached at all. The people of this country know who serious and who are unserious and I want to assure them today — because you gave me the opportunity to give the assurance — that we are ramping up our efforts, more than ever, to address crime and criminals.

“Maybe, at a later time, I will say more, but that is enough for now,” the prime minister said.