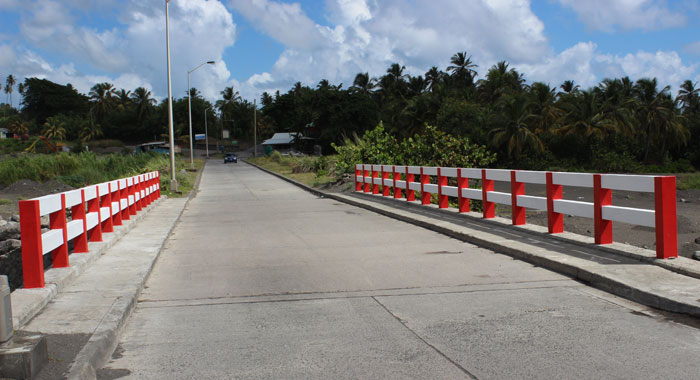 The government of Taiwan has refurbished the Rabacca Bridge in North Windward, St. Vincent, which it constructed over a decade ago at a cost of EC$7 million.

The bridge, which is officially named Yurumein–Taiwan Friendship Bridge, is a historic piece of infrastructure that ensures that the north-eastern block of the country, home to the indigenous population, remains connected to the rest of the island.

Before the construction of the bridge, officially named the Yuremein-Taiwan Friendship Bridge, vehicles and persons crossed the Rabacca Driver River by passing through the unpredictable and often treacherous waterway.
Speaking at a ceremony in Rabacca on Tuesday, Taiwan Ambassador to St. Vincent and the Grenadines, Calvin Ho, noted that the bridge opened in 2007.

Ho, who took up duties in Kingstown in April, said when he assumed duties, his colleagues told him about important work that the embassy should do in the country.

Ho said that one of those projects was to replace the guardrails on the bridge.

“Actually, at that time, I didn’t understand but I know it is very important so I asked my colleague to consult OECC,” Ho said, referring to the St. Vincent-based Taiwanese construction company that built the bridge.

When the bridge was constructed, it was fitted with guardrails that were made of galvanise pipes.

However, the elements soon took its toll on the rails, as the bridge is located very close to the sea.

He said that OECC responded positively and sent a team to explore and later complete the work.

“I think they provide a safer bridge for our local Vincentian friends,” the envoy said and also thanked the Vincentian government, adding that with its support, especially that of the Ministry of Transport, gave good advice.

“In conclusion, I want to say … I am really happy to see that we can be a part to join you to complete the two sides of the handrail so that local people here, … especially pedestrians, they can walk safely.

“And also, certainly this bridge provides a very convenient environment to drive through, moving people, moving all kinds of agricultural products and your daily needs to each side. I believe it also helps the economy of St. Vincent.

“I think it is also important because this bridge was name the Yuremein-Taiwan Friendship Bridge,” Ho said, adding that this shows the great friendship between Taiwan and St. Vincent.

The refurbishment also included the erection of two plaques commemorating the construction of the bridge.

Daniel said: “Ambassador, we the people of this constituency, we are grateful, we are thankful for the generosity of the government and people of Taiwan.”

Daniel outlined the challenges that persons faced in crossing the river before the bridge was constructed.

“I can say there were tremendous nightmares over the years. And I believe there are persons still alive and around to tell their many stories of misfortune…

“As for me, I would have seen the loss of property and life right at this very river,” he said, and recounted an incident one Friday afternoon when a woman who lived in Langley park and worked on the Orange Hill Estate was swept away and died as she tried to cross the river on her way home after collecting her week’s wages, which were to help to feed her siblings.

The minister said that on another occasion, a 10-tonne truck owned by the Orange Hill Estate, packed with goods going into Kingstown, became stuck, and one of the footmen had to run back to Orange Hill to get help from a tractor.

However, by the time the tractor arrived, the truck had been swept away and has never been seen since.