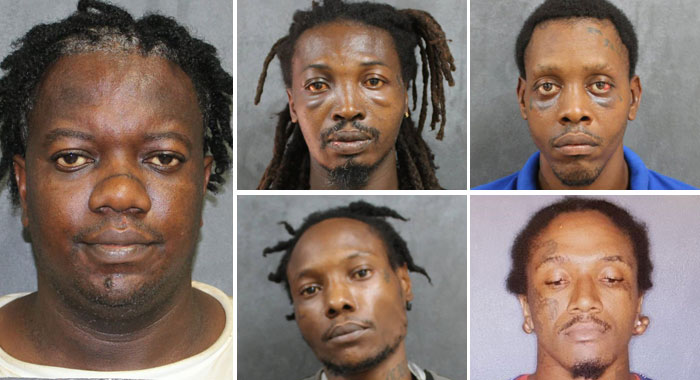 On Thursday, Charles, along with the three men accused of last weekend’s armed robbery of Reisha Twana Browne-Caesar, wife of Minister of Agriculture Saboto Caesar, were brought before the Kingstown Magistrate’s Court and slapped with another charge.

The men accused of robbing Browne-Caesar are Elroy Rogers, a 26-year-old labourer, of New Montrose, Glenville Harry, 34, self-employed, of Vermont and Rocuan Robinson, 29, a mechanic, of Campden Park.

The four, along with Olrick Hanson, of Mayreau and Roseau, Sion Hill, are charged that on Sept. 14, they robbed Thomas Supermarket #2, located in Brighton, and Lisa Wilson of one cash machine containing EC$650 and approximately US$150.

Another element of the charge is that they wounded Grafton McDowall.

Hanson is further charged with unlawfully and maliciously wounding a 30-year-old unemployed woman, of Roseau.

Police are alleging that on Aug. 10, about 2:40 a.m., Hanson wounded the woman by stabbing her on her left hand with an unknown object in Roseau.

The men were all denied bail as the prosecution reiterated that investigations are ongoing and the men are likely to face other charges, including murder.

The charge against Rogers, Robinson and Harry is that on Sept. 15, at Cedars, being armed with a gun, they robbed Reisha Twana Browne-Caesar, of a quantity of items valued EC$10,350.50 and other documents.

As it relates to Charles, a police constable, on Wednesday, for a second consecutive day, he was denied bail on charges that on Sept. 17, he had in his possession one black and silver Smith and Wesson .38 revolver, serial number unknown, and six rounds of .38 ammunition, without a license issued under the Firearm Act.

His trial in that matter is slated to conclude on Oct. 8.

Charles has been suspended from duty and is being tried in connection with the July 7, 2017 burglary of the St. Vincent and the Grenadines Postal Corporation.

As it relates to that crime, he was further charged that on July 7, 2017, at Kingstown, being employed in the Public Service and being charged with the performance of duty by virtue of such employment, agreed to receive property for himself or any other person on account of anything omitted to be done by him in the discharge of his duty of office as a policeman.

He has been granted EC$130,000 bail with one surety and was ordered to report to police on Mondays, Wednesdays, and Fridays between 6 a.m. and 6 p.m.