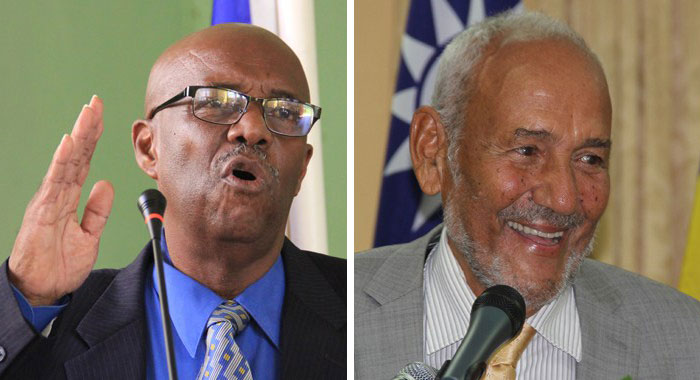 Another public spat has broken out between the two former leaders of the main opposition New Democratic Party (NDP): former Prime Minister Sir James and Member of Parliament for East Kingstown, Arnhim Eustace.

The latest public locking of horns began on Boom FM on Sept. 11, when Sir James said on radio that Eustace was his biggest error.

Eustace fired back on NICE Radio on Tuesday, saying of Sir James, “I fear that despite your overall good record of governance, your post-service contribution would be remembered for its toxicity and self-praise.”

In his public comments, Sir James has been repeatedly and harshly critical of Eustace, who replaced him as leader of the NDP and prime minister in October 2000 – 16 years after the NDP came to power, and five months after it would be booted out of office.

But the two men soon fell out and the relationship got increasingly worse with the public exchange of harsh comments over the years.

For instance, in calling for Eustace to demit office as head of the NDP after the party’s third electoral defeat – in 2015 — Sir James said that when there is a death in a house, people usually open the windows to let in fresh air.

For his part, Eustace has accused Sir James of being an acolyte of the ULP.

Eustace was instrumental in rebuilding the NDP, which Sir James left in shambles ahead of the March 2001 election, to which he had agreed before Eustace took over leadership of the party.

The NDP lost the 2001 poll 12-3 to Ralph Gonsalves’ Unity Labour Party, which has been in office since then.

On Tuesday, Eustace read what he said was a letter that he was sending to Sir James later that day in response to his Sept. 11 comments.

Eustace noted that in the radio comments, Sir James had said that he apologised to SVG for the error he made in Eustace succeeding him.

“I am unsurprised, quite frankly, that you would be venomous towards me. Your public praise of me as a Minister of Finance, and that was often, an economist, and leader, and as the fiscal advisor and director of finance, you said was responsible for some of the most progressive gains while you were prime minister,” said Eustace who was Minister of Finance, under Mitchell’s leadership, from 1998 to 2001.

He said that when he (Eustace) became prime minister, Sir James’ praise of him changed when he reduced Sir James’ salary.

While Sir James had demitted office as prime minister, he remained as Member of Parliament for the Northern Grenadines until the March 2001 poll.

“I was of the view that the country could not afford, neither was it fair to pay two prime ministers’ salaries. I will never regret that decision.”

Eustace further said that he was “surprised and encouraged” that Sir James had decided to take responsibility for “the error you have described, by apologising to the people of this nation.

“The unmistakable scope of that apology, I hope, [should include] your acknowledgement that you were forced to hand over leadership by your depleted popularity, public disaffection with you and the consequent rise of the worse prime minister and administration that this country has ever seen: Ralph Gonsalves and the ULP,” Eustace said.

He said he inherited from Sir James “a skeletal party” a couple of months after early elections were agreed.

“That 12-3 loss was a referendum on your leadership. And for the years I led the NDP, I battled the Gonsalves administration who we moved from 12-3 to 7-8, then election petitions which may prove to have been won by the NDP,” said Eustace who stepped down as leader of the NDP in November 2017, less than one year after the party suffered its fourth consecutive electoral defeat.

“You spent those years, Sir James, undermining the party you co-founded, publicly insulting and tearing down many of the NDP’s candidates and me and cozying up and praising Gonsalves, but that is, apparently, the past. You have returned to the NDP. Should I say welcome back? Rest assured, Sir James, my period as immediate past president of the NDP would be spent very differently from yours.”

Eustace listed for Sir James four things that he has done and will do differently now that he is no longer leader of the NDP.

“I resigned early enough as leader in this administration to give my successor years, rather than mere months, to stamp his leadership and prepare for elections.

“I will never, ever, be so presumptuous, self-serving and destructive as to present my opinion on any NDP policy as that of the party; who are you to state NDP’s position on China? That is the province of the leader, Dr. Friday, not its past-past president.

“I will always endeavour to encourage Dr. Godwin Friday, my capable successor, a man of integrity. If he needs me, I will avail myself of him. If he does not need me, I will take no offence, for such is his right.

“I will never pass off a glowing homage to my greatness as a funeral tribute to any stalwart of the party and great nation builder. Going forward, Sir James, I ask that you dwell on the ways you can interrogate without disparaging. I fear that despite your overall good record of governance, your post-service contribution would be remembered for its toxicity and self-praise.”

9 replies on “Former NDP leaders in another public spat”