‘I don’t have a kingdom’ — PM Gonsalves 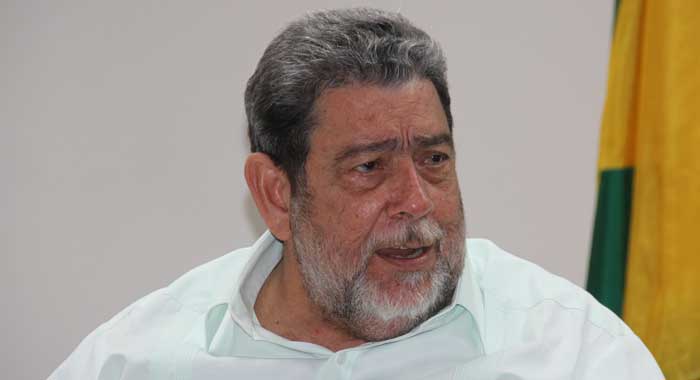 The prime minister was responding on Tuesday to comments by Sir James on radio last month, that his (Sir James’) “kingdom” fell, and so will Gonsalves’.

Sir James, a founder of the main opposition New Democratic Party, relinquished the role of prime minister in October 2000, after some 16 years in office and, amidst sliding popularity.

On Tuesday, Gonsalves used the opportunity of saying that two designs were being considered for a proposed state-owned hotel at Mt Wynne to respond to Sir James.

“I’m not going to get involved as to say which design Ralph prefers because a fella, a former prime minister, Sir James, I heard him said that all kingdom fell and Ralph own will fall.

“I’m the prime minister in a functioning democracy. But I would understand what he say because he say he handpicked the man to do this (the Financial Complex) and tell the man how to build design this one, also what he called ‘The People’s Palace’ (the Central Market), select also where to put it, he told us where to put the cruise ship pier, he didn’t need a study for that because he used to dive there as a boy and he knew and so on.

“Well, kings can do that. I’m not a king. So don’t ask me about which design I prefer. I don’t have that skill,” he said, adding that there are stakeholders and people with the competencies who can advise on that.”

Gonsalves noted that his tenure as prime minister will come to an end, but suggested the way in which that is likely to happen.

“Either voluntarily by me, the parliamentarians, which is unlikely, death, or also, very unlikely, by vote. Because I know if I go back I will win again — as the sun shines tomorrow,” said the 72-year-leader, who has been a Member of Parliament for a quarter century.

“That doesn’t mean that, as they would say, Ralph could only say he would win again if he rigging election. You know they will say that. I tell you that I know I will win because I know it inside of me and I know my prayers and I hear, I get certain answers but I never take the people for granted. And that may be some of the reasons why I win. Never ever take the people for granted.

“So some who think they might see my back voluntarily, they might not. I might answer the call of the people not to walk away yet because some things I hear some people talking, I might have to stand up in the frontline and take them on very sharply,” Gonsalves said.