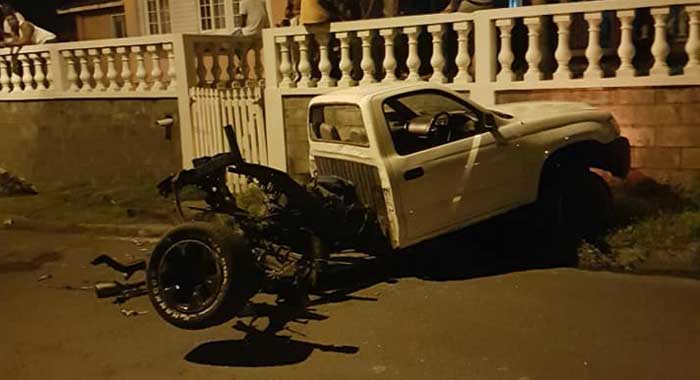 The vehicle at the scene of the accident.

The 19-year-old Magum man who was driving the pickup involved in Sunday’s fatal accident was taken into police custody but was later released without charge, pending further investigations.

Charges could be brought against the man, Bazzroy Brackin, in relation to the accident at Langley Park that left two teenagers dead and several other persons nursing injuries.

Police said in a bulletin on Monday that the accident occurred along the Langley Park Public Road, about 6:50 p.m. Sunday and involved motor vehicle TK 696, a white pickup owned by Basil Brackin of Magum.

According to investigations TK 696 was travelling towards Magum with passengers from a “cook out” in South Rivers when it struck the front of TQ553, a purple Isuzu truck, which was parked along the Langley Park Public Road, near Maurice Warrican’s residence.

TK 696 then swerved on impact and struck a retaining wall owned by Gordon Henry of Langley Park.

The cargo bed of TK 696, in which several passengers were travelling, reportedly became detached.

Clevique Huggins, 15, and Delroy Baptiste, 17, both of Magum, died on the spot.

Arion May, 17, and Odel Bowens, 15, of Magum, Adique Ollivierre, 14, and Jolano Da Souza, 25, of Overland, and Denisha Nero, 19, of Owia, were treated at the Georgetown Health Centre and discharged.

Ivor Clarke, 14, of Sandy Bay, and Beverly Nanton, 19, of Magum were transferred from the Georgetown Medical Centre to the Milton Cato Memorial Hospital.

TQ 553 was reported to be moderately damaged whereas TK 696 was written off, police said, adding that their investigation into this fatal accident continues.

This incident brings to five the total number of road fatalities in St. Vincent and the Grenadines for 2018.

2 replies on “Driver in fatal accident released without charge”