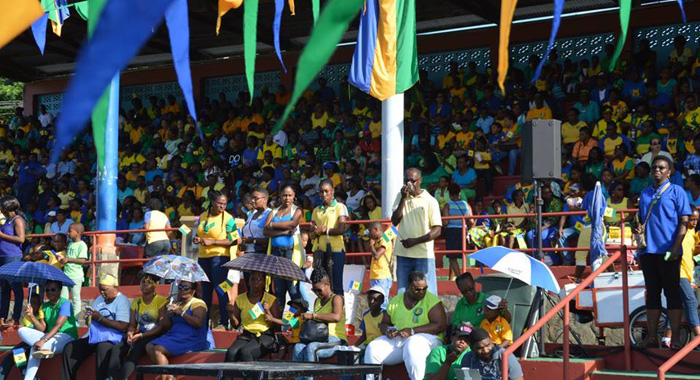 Statement by St Vincent and the Grenadines Reparations Committee on the 39th anniversary of Independence.

When the former enslaving European powers came to our region, they met thriving civilizations where our Kalinago and Garifuna ancestors lived side by side in harmony and mutual respect. They wanted our lands and our people said No. The British imperialist immediately started a war of domination that was stiffly resisted by our ancestors for decades. Our people’s courageous resistance against colonial domination is responsible for our nation, Yuremei, which the British renamed St Vincent and the Grenadines, being the last to be conquered in the Caribbean.

When our National hero, Joseph Chatoyer was killed in 1795, the resistance went on for another two years before the British gained absolute control. The savagery was unspeakable. The genocidal actions of Britain remain as a stain on the conscience of that nation. But our people’s resistance to colonial settlement and conquest helped to paint the beautiful picture where we, our people, our nation bear the unique and proud distinction of being the last to be completely dominated and colonized. As a result, of all the islands in the Caribbean, Yurumei endured the shortest period of full-blown chattel slavery.

The Caribbean Reparations Commission (CRC), at its retreat in Jamaica in September 2018 resolved that in order to take the reparations effort to a new level we must combine the task of educating our people with greater and increase activism. We must not only make a demand. We must demonstrate that we intend to win the battle for our demands as outlined in the 10 point Reparations plan.

Based on our recognition that the post-colonial Caribbean is not post-colonial and that Euro-centric thinking still dominates our thought and action and that colonial relics and monuments remain a constant feature and occupy a dominant space on our landscape, the CRC agreed to launch a region-wide renaming programme. This renaming programme is intended to give true honour and glory to the real heroes and heroine of our people as well as to erase prominent colonial relics from our landscape.

As Curtis King, the deputy chairman of the SVG Reparations Committee has repeatedly proclaimed, “How the hell do we celebrate independence at Victoria Park?”, Queen Victoria being the epitome of British colonisation in our country.

The SVG Reparations Committee, therefore, calls on the government of our country to immediately rename Victoria Park, during the official celebration of this year’s independence, with a name more befitting an independent country. Our history is replete with outstanding statesmen, women and symbols from which we can choose.

We are mindful of the fact that ever so often there are flickers of enlightened and nationalist thought and action from our leaders. We commend the move to rename the National Insurance Scheme to National Insurance Service, the rewording of the oath of office for elected and high state officials that now entrust them to work for the people of our country and upholding our constitution rather than for the queen, her heirs and assigns. The program of renaming, reclaiming and renewal must be strengthened and given real meaning and life.

Therefore, the SVG Reparations Committee is of the view that these flickers of conscious light must become a flame. The Independence anniversary celebration is a good time to rename the Royal St Vincent and the Grenadines Police Force to the SVG Police Service.

The SVG Reparations Committee also calls on the government to move swiftly to do all in its powers to find ways to recognize and integrate our heroic Garifuna brothers and sisters in Belize, Honduras, Guatemala, Nicaragua and the United States in our cultural and national plans of development.

The SVG Reparations Committee remains steadfast in the view that Independence and Reparations will remain empty slogans unless an untiring effort is made to lift the consciousness of people on all issues related to their history and place in the world.

On this our 39 anniversary of independence we call on our government, religious, trade unions and other civic bodies to turn our country into a school so that our nation and people will learn its history, abandon Eurocentric ways of thinking and living and turn to a new consciousness that is critical and necessary for surviving in these modern times.