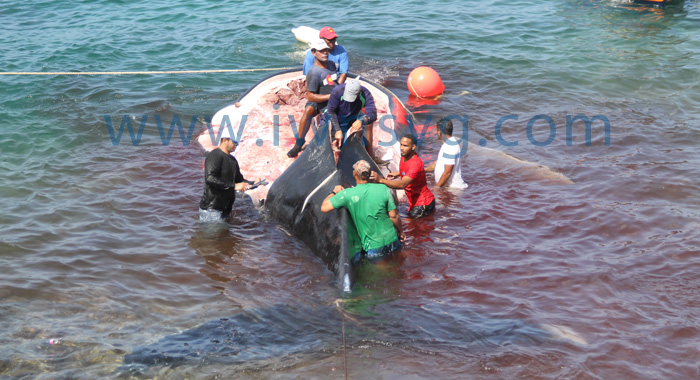 However, a Japan Ministry of Foreign Affairs official declined to say on Monday whether Tokyo’s assistance to Caribbean Community (CARICOM) nations is linked to their support for Japan at the International Whaling Commission.

At the meeting in Brazil, most IWC members rejected Tokyo’s “Way Forward” proposal, which, observer say, aimed to undermine the existing 30-year ban on commercial whaling.

Despite the support of host nation Brazil and other key nations, there was not enough support to create a South Atlantic Whale Sanctuary, which would have prevented Japanese whalers from hunting in the South Atlantic Ocean under what they say is a “scientific” whaling programme.

Conservationists — such as Greenpeace and Sea Shepherd — say that Japan’s activities in the Southern Ocean amounts to commercial whaling.

The proposed ban garnered a majority of vote but not the super-majority it needed to take effect.

Conservationists have accused Tokyo of using its economic might to influence the vote of many smaller nations such as those in the Caribbean, most of which do not have a whaling culture, or even advocate whale watching as part of their tourism product.

Japan has donated a number of fisheries complexes to SVG — and other Caribbean nation’s — and has paid for the rehabilitation of the small whale-processing plant in Semple Cay, located off Bequia, the largest of the Grenadine islands.

Several of the Japanese officials who have visited SVG over the past few months have visited the Semple Cay facility.

“I won’t say whether our support is linked or not,” Daisuke Nakano, Tokyo’s director, Mexico, Central America and Caribbean Division, said Monday to two Caribbean participants in the 2018 Pacific-Caribbean Journalists Program.

“But from the socio-economic need of each Caribbean country, the government of Japan has been deciding and going forward, also, including St. Vincent and the Grenadines…, fisheries and whaling-related assistance were included,” he further said.

Bequia whalers killed just one of the 1,380 whales landed around the world in 2017.

The IWC permits the island’s whalers to kill four humpback whales every year, as part of their aboriginal sustenance culture.

However, they hardly ever exhaust the quota, and often go for years without a single catch as they pursue whales using sails boats and hand-held harpoons, as they have been doing since whaling was first introduced to the tiny island a century and half ago.

When a whale is caught, the meat is used as food across the entire island chain, its oil is used in traditional medicine for humans and animals, and the bones and teeth are used in jewellery and for decorations.

Earlier this month, SVG’s Prime Minister Ralph Gonsalves signed a US$3.5 million agreement with for the construction of a Black Fish Facility in Barrouallie, a whaling town on St. Vincent’s western coast.

In Barrouallie, whalers traditionally catch pilot whales, but have also killed orcas (killer whales), much to the condemnation of local and international observers.