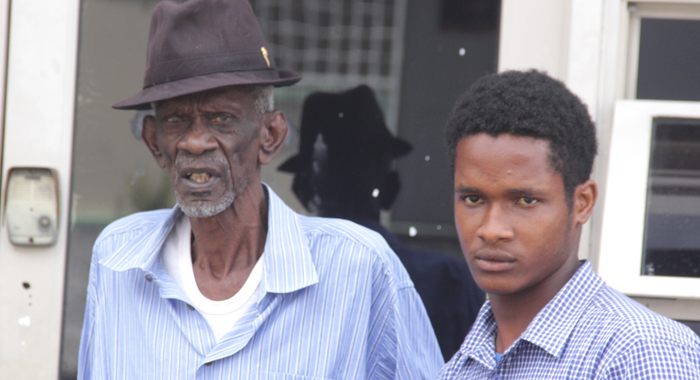 Caspar Haywood, left, and his grandson, Zachary Haywood, leave the Kingstown Magistrate’s Court on Tuesday after the proceedings. (iWN photo)

A 17-year-old youth who struck his hard-of-hearing grandfather in the head with a metal chair was spared a criminal record on Tuesday after the virtual complainant decided not to give evidence against him.

“I can’t hear what you are saying,” Caspar Haywood said after Senior Magistrate Rickie Burnett had told Zachary Haywood, “Touch your grandfather and tell him to come [to the dock] at the Kingstown Magistrate’s Court.

It was the second time that the matter was being called that day, after being stood down initially after the man’s hearing problem became apparent.

Prosecutor Police Constable Corlene Samuel had told the court that she would put something in place to facilitate the man’s condition.

“He wants me to know that he can’t hear. He is telling me that from all there,” the magistrate observed as the man made his way to the dock for the second time.

Samuel raised her voice and asked the man if he was hearing her.

“A little,” he responded.

The prosecutor asked a court orderly to stand next to the elderly man and repeat to him what was being said in court.

Asked if he was proceeding with the matter, the virtual complainant said:

“Ah would like it to finish with because is family dispute.”

He further said that he had made that decision.

Samuel then told that the court that the prosecution was offering no further evidence in the matter.

Burnett then said that while the matter had ended, he wanted to see the report of injury form.

The prosecution said that he was just about to call that to his attention.

“Your honour, irregardless (sic) of the situation…, there was a dispute and the grandfather hit him because he was disrespectful. And he (grandson) took this chair and hit him (grandfather),” the prosecutor said, pointing to a chair made of steel rods of the type used in construction.

“You did that? Talk to me,” the magistrate told the accused man.

Asked where he was struck, the older Haywood said:

“Is after I lash him with the cane to come out my yard and he run go out. So I turn my back now going back to the porch, he come behind and lash me with the chair; but I lash him first.”

The magistrate reprimanded the youngster, telling him, “You don’t do that to an old man. He’s your grandfather.

“Oh gosh man. How yo’ go treat the old man like that?”

The magistrate said that behaviour is unacceptable although the older man might have done something to his grandson.

“That’s how old men behave,” Burnett said. “You can’t hit them. Just walk away and tell them — you know? You can’t hit an old person like that, mister man. Don’t do that! You coulda kill him, you know.”

The grandfather and grandson left the court together after the proceedings.

4 replies on “Youth strikes grandpa in head with metal chair”