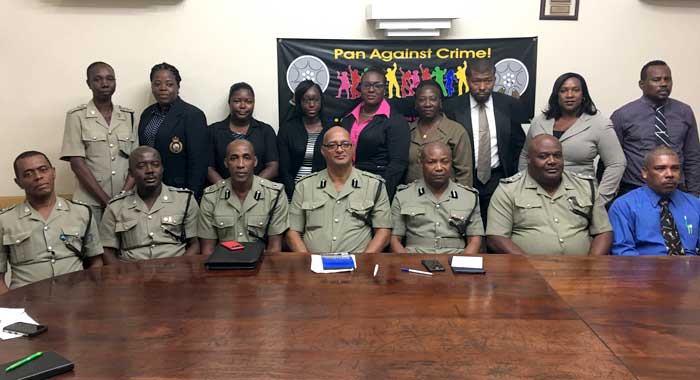 The Royal St. Vincent and the Grenadines Police Force on Wednesday launched its Sexual Offences Unit, with acting Commissioner of Police, Colin John saying that specialised training would be given to its eight members to equip them for the task ahead.

The unit, which includes one male, brings with it decades of experience and includes seasoned, very experienced detectives and other officers who the force said are suitable for the assignment.

“The hierarchy of the organisation, we see the need to have a specialised unit dealing with sexual offences.

“Persons who are affected by rape or other acts of indecent assault, they would, in most cases, be traumatised and we see the need to have persons who are specially trained to deal with them,” John said at the launch event at police headquarters in Kingstown.

“We have the unit in a specific place. Specialised training will be given to that unit. Some persons are already trained in certain aspects of handling sexual offences so we will enhance that training.

“We would sensitise the people as to ways in which they can contact us and contact that unit so that we can better serve the public. We will also be looking back at those cold cases and try to see if there is any evidence or anything that we may have overlooked, now that we have some trained eyes dealing specifically with that.”

The police chief said the unit resulted from a committee headed by Assistant Commissioner of Police Richard Browne, and including assistant superintendents of police Charles, Butcher, Andrews, and Bailey.

“This committee will be dealing primarily with rape matters and matters of unlawful sexual intercourse with a girl under the age of 13,” John said.

He said the unit will also deal with sexual offences against visitors and foreigners.

Offences relating to sex with a girl older than 13 but younger than 15, where the penalty is five years in imprisonment, will remain within the purview of outstations “so that persons can get practice, as it were, to deal with sexual offences,” the police chief said.

The unit is being housed at the Questelles Police station and can be contacted by telephone number +1-784-456-1750.

John said the unit will also be looking into cold cases.

“So we will be asking the police station where offences were reported and no one was arrested or apprehended for them, that these case files be sent to that unit so that they can be reviewed and we can see if there is any evidence that can assist us in solving these crimes.”

He said that the practical benefits are that persons in that unit will be in one location and can give of their knowledge and skills.

“So, it’s like iron sharpening iron in that case. They would be given specialised training so that they can enhance their skills in solving cases of rape and those offences related to indecent assault.”

Meanwhile, Browne speaking at the launch said that when he was promoted to the officer rank in 2011, a call was made for the setting up of such a unit.

“When Commissioner John became the acting commissioner in January of this year, we allowed him to settle in before we put certain proposals to him and one of the proposals that we placed on the table again at the officers’ level was the setting up of such a unit. Commissioner John ran with the idea,” Browne said.

Browne said the committee was set up in August when the mandate was given to look into the formation of such a unit.

“We set to work, we looked throughout the organisation for the best possible candidates to form such a unit and before you today are persons who are experienced in dealing with sexual offences, some are highly trained and others are young police officers who we, the committee, believe can be moulded into good investigators to deal with sexual offences.”

He noted the mandate of the unit.

“We would have seen over the years the rising incidents of sexual offence in our country and we thought as well it is best to have a … unit set up specifically who can deal with these matters.

“I thank the commissioner for running with the idea that we propose to him and we hope to see benefits coming out of this new unit and hope to see a reduction in offences of a sexual nature in the state of St. Vincent and the Grenadines,” Browne said.