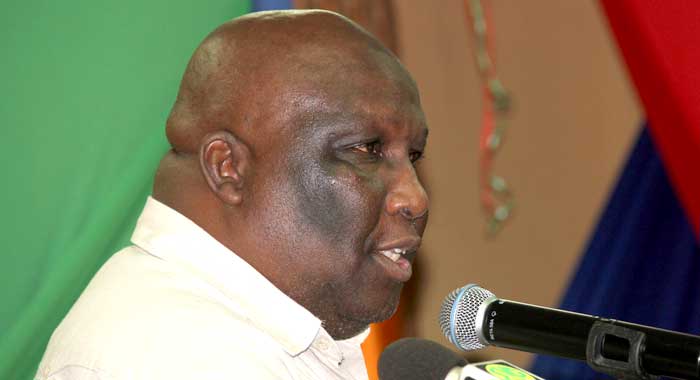 Minister of Education St. Clair Jimmy Prince might have placed some doubt in the minds of listeners on Tuesday as to whether work in agriculture is to be avoided in favour of other professions.

His comments came as he praised the policy of his Unity Labour Party, which has expanded the places in academic intuitions for students.

He was speaking at the ceremony in Kingstown, where the Taiwan embassy began distributing US$200,000 in bursaries among 794 students across St. Vincent and the Grenadines in its annual scholarship programme.

He said that today, people talk about education more than they did in years gone by.

“People today go to school with a particular aim in mind. That’s a revolution. If you want to call it an evolution, do so too,” he said.

“But there are times when people went to school without even knowing what the outcome was going to be.

“And there are others who went to school knowing what the outcome was going to be: that is the banana fields and the riversides, wherever,” said Prince, who is Member of Parliament for Marriaqua, an agricultural district.

“Nowadays, when a child goes to pre-school, the parent starts thinking about what kind of professional that person is going to be. It never used to happen. So that is what we call a revolution, in a number of ways,” Prince said.

Prince’s comment comes at a time when the Africa, Caribbean and Pacific group of states are being encouraged to try to make agriculture more attractive to the young people as there are many opportunities in the sector.

At Caribbean Week of Agriculture in Barbados last month, Michael Hailu, director of the Technical Centre for Agricultural and Rural Co-operation, a joint agency of the ACP and the European Union, said that policymakers must speak to the youth in terms of agribusiness rather than simple agriculture.

“… we believe that there are a lot of opportunities, whereas the interest of young people is not that much in going into agriculture,” Hailu told iWitness News.

In SVG, many farmers complain about people’s unwillingness to work in the agricultural sector at the level of the farm.

At Tuesday’s event, Prince noted that this year, 48 students were given national scholarships.

“You may say that’s only 48. Compare it with four and you see what happens.”

He said scholarships and bursaries have not been given “in the straight academic” areas but also those who completed the associate degrees in the divisions of technical, teaching and nursing education.

The government also gave 78 tuition scholarships and about 100 bursaries earlier this year with the help of the Taiwanese.

He said the role of all these initiatives is to ensure that all of the nation’s students achieve their full potential, as far as possible.

The education minister encouraged principals, teachers, and parents to do all in their power to provide the learning opportunities and guidance that students need to excel.

“Not just to let them come to school and learn what you teach them but get them to think creatively, to think critically so that they would be very good and important pillars of the society that we are trying to build,” he said.