The Caribbean island of Mayreau could be split in two, thanks to erosion 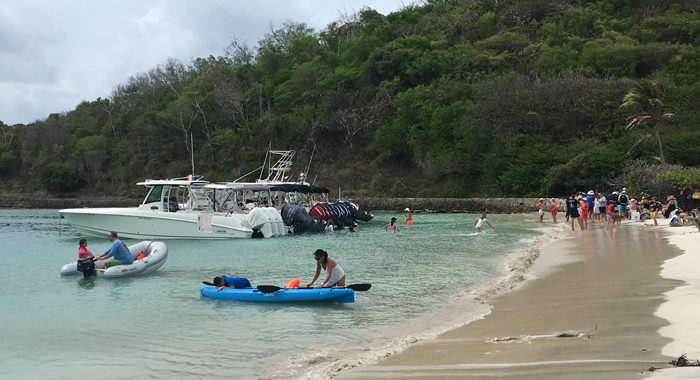 On the other side of Windward Carenage Bay is Salt Whistle Bay on the Caribbean Sea coast. The world famous beach attracts visitors to the Mayreau, where tourism is a mainstay of the economy. Credit: Kenton X. Chance/IPS

KINGSTOWN (IPS) – As a child growing up in Mayreau four decades ago, Filius “Philman” Ollivierre remembers a 70-foot-wide span of land, with the sea on either side that made the rest of the 1.5-square mile island one with Mount Carbuit.

But now, after years of erosion by the waves, he, and the other 300 or so persons living on Mayreau, are confronted with the real possibility that the sea will split their island in two, and destroy its world famous Salt Whistle Bay.

At its widest part, the sliver of land that separates the placid waters of the Caribbean Sea at Salt Whistle Bay from the choppy Atlantic Ocean, on Windward Carenage Bay, is now just about 20 feet.

“There is a rise in the sea level with climate change. You can see that happening, and not just in that area alone,” Ollivierre told IPS of the situation in Mayreau, an island in the southern Grenadines.

The sliver of land near Salt Whistle Bay once had a grove of lush sea grape trees.

Beneath the waves, the destruction is as evident.

If the land separating both bays were to be totally eroded, St. Vincent and the Grenadines, an archipelagic nation, would see its number of islands, islets and cays increase from 32 to 33.

But this could be potentially devastating for Salt Whistle Bay, which Flight Network, Canada’s largest travel agency, ranked 16 out of 1,800 beaches worldwide last November.

A major part of the economy on Mayreau is the sale of t-shirts and beachwear to the tourists that Salt Whistle Bay attracts. If the beach is compromised, the islands might not be as attractive to visitors and its economy would suffer.

“My fear is that if the windward side breaks through onto the other side, it can actually erode that whole area… All of that area is sand and it not so much sand separating both sides so we really have to be careful and take the necessary measures to prevent that from happening,” Ollivierre said.

Ollivierre’s fear is shared by tour operator Captain Wayne Halbich, who has been conducting sea tours among the islands of St. Vincent and the Grenadines for almost three decades.

Halbich has witnessed the impact of rising sea level on Mayreau and he often tells his guests, light-heartedly, that Mayreau has the shortest distance between the Atlantic Ocean and the Caribbean Sea.

“That was actually a lot wider, and it was covered almost entirely by the sea island grape trees. It is going slowly,” he told IPS.

“This is a serious problem. This is what I always say to people. We are seeing really concrete signs in relation to global warming. It is also from the fact that the reef is dying. The reef cannot produce sand and any sand you lose is not coming back. That is the other story,” he says.

And, unless something is done quickly, one cyclone — which is now more frequent and intense in the Caribbean — could cause the worst to happen in Mayreau.

“If we have a storm this year, it would break away,” Halbick told IPS, as he reiterated his fears that Mayreau could lose its famous Salt Whistle Bay.

The situation in Mayreau has captured the attention the national assembly in the nation’s capital, with Terrance Ollivierre, Member of Parliament, for the Southern Grenadines asking Prime Minister Ralph Gonsalves what can be done quickly to remedy the situation.

Gonsalves said that his government has been working with a private sector operator who has the resources and equipment nearby to be able to do some remedial work.

He said there have been a number of suggestions by technical experts, including a quick fix of putting some boulders at the beach at Windward Carenage as a kind of mitigation.

“But much more is required than that and it is going to be a larger project. So, the long and short of it, the fight which we are having on climate change, is a fight which relates to what is happening at Salt Whistle Bay. Rising sea levels, wave action, and then, of course, people moving away a lot of natural barriers, which have been there.

“When we talk about climate change and some people deny it and many of our own people scoff at it and when our people are not sufficiently alert and have not been in respect of the sea grapes and the manchineel, the mangrove, the coconut trees, even sand, we are paying for it.”

The prime minister told lawmakers that some persons have suggested that nothing be done at Mayreau and that the sea would return the land in the natural course of things.

“That’s not a scientific approach. We have a difficulty and we are trying to help.”

The lawmaker who called the situation to the attention of the parliament also agreed that doing nothing is not an option.

He pointed out that some persons had suggested that approach at Big Sand Beach in Union Island, another southern Grenadine island.

Residents are still waiting for the sea to return the sand to the once-famous beach, which has been reduced from 50 feet to less than 10 feet wide.

Among those who are taking action are Orisha Joseph and her team at Sustainable Grenadines Inc., a non-governmental organisation, which over the last year has been restoring the largest mangrove forest and lagoon in St. Vincent and the Grenadines, located in Ashton, Union island.

The work will create breaches in strategic areas of an abandoned marina to create water circulation in the area, which has been almost stagnant for the last 20 years.

As part of the project, the group has planted 500 mangroves trees in Union Island.

“Wherever you have those types of mangroves, you would not have erosion as the roots help to filter silt and it also breaks the energy of the wave, like around 70 per cent.

“So you have your first line of defence, which is your seagrass, then your coral reef, then your mangrove. So, by the time you have really strong impact then you have a lot of buffer zones to break down that,” Joseph told IPS.

“All in all, as we go into the blue economy, what we need to do is to see how NGO and climate change organisations could really work with government and let everybody know that we shouldn’t be on opposite side,” she said, adding that government must insist that no construction takes place less than 40 metres away from the coastline.

“Everything in the environment is there for a particular reason and we have to be careful,” Joseph said, adding that coast vegetation prevents soil erosion.

To illustrate, she said there is a vine that grows on the sand on some beaches and people remove them to expose more of the beach.

“But when you remove that which is causing the sand to stay in place, then you are creating a bigger problem. We have this problem where people just go cutting down mangroves because they just want beachfront land and not really understanding that this vegetation is there for a reason,” she told IPS.

3 replies on “The Caribbean island of Mayreau could be split in two, thanks to erosion”