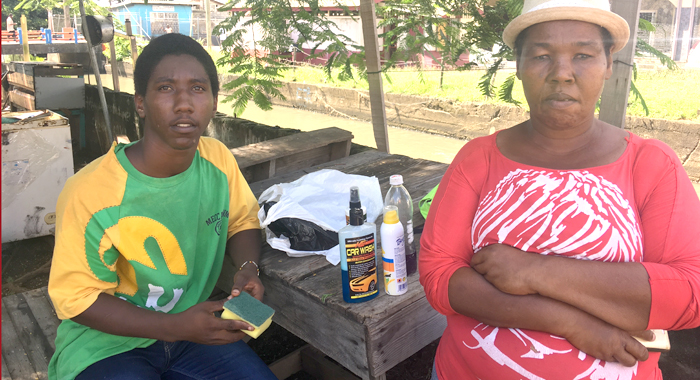 After living n the streets for four months, Inola Hayne and her children have a roof over their heads. She is seen her with her 18-year-old son, Junior Haynes, who is balancing studies with trying to make a living washing cars in Kingstown. (iWN photo)

The government of St. Vincent and the Grenadines has rented an apartment for the family, including children 10 and 6, who had been living under a tree and sleeping under sheds in Kingstown for almost four months.

Last Friday, staff at the Social Welfare Department moved the family to a house in East St. George, two days after their story was published on iWitness News.

Inola Haynes had told iWitness News last Wednesday that the department had told them that the government would pay the rent for six months if they were able to find an apartment for EC$450 per month.

But for almost four months, she had had no success finding such a place.

In a follow-up interview on Monday under the flamboyant tree that was her home for four months, Haynes expressed appreciation that she now has a roof over her head and her children are safe.

“I feel comfortable but I would like to build a little shelter for myself,” the unemployed woman told iWitness News.

The woman has had a tough life, her mother having given her away as a child to someone in Union Island.

She said that since the story was published, her estranged brother has reached out to her and offered to allow her to build a home on lands that he owns.

“I want to thank everybody who helped me,” she said and expressed special appreciation to those who responded with clothes and food.

Haynes, her boyfriend, and her children — 18- and 6-year-old sons and a 10-year-old daughter — became homeless after their landlord evicted them from an apartment in Questelles over her boyfriend’s drinking problem.

With nowhere to go, they found themselves living on the streets of Kingstown for months, although the Social Welfare Department was aware of their situation.

She said that last Friday, a social worker turned up with a vehicle and transported them to the apartment in East St. George.

Haynes said that the social workers told her that she would still have to look for an apartment closer to Kingstown so that it would be easier for her children to travel to their school, which is located in the city.

Further, after six months, Haynes, who is unemployed, would have to foot the rent bill, she said the social worker had told her.

She, however, said she does not know how much the rent is.

“I want a work right now to help myself,” she said, adding that her boyfriend, who had caused their eviction, had not moved to the new apartment with them.

On Wednesday, the man was sitting under the tree in Kingstown where he and his family had spent much of their daytime hours over the past few months.

He told iWitness News that he was still living there.

Meanwhile, Haynes’ 18-year-old son, who was the subject of some criticism in the media because he had left the security guard job he had some years ago, explained on Wednesday that he had been fired.

“… it was hard on me. I was fired because sometimes the late thing, you know,” said the man who worked 12-hour shifts with one day off every week and received just over EC$700 a month.

“But I don’t really study that. I decide to come out and do something else and make use of myself,” said Junior, who dropped out of secondary school because of the challenges his family was having meeting their daily expenses.

The youth washes vehicles for money and is enrolled in government-funded classes and plans to write CXC maths and English.

“I’m doing this for the time because I am kind of busy with my classes,” he said of his vehicle-cleaning operation.

“When I finish my classes and I get what I want, I will be on the good side,” he said.

The youth said his car washing operation is going well and that he has some regular customers.

He is asking persons to support his efforts, saying he charges EC$10 to wash the outside of a vehicle and EC$15 to clean both inside and outside.

Junior’s business is based “under the same tree” on McCoy Street, near the former Black Cat Bar building that his family called home for almost four months.

And as for his siblings, he said they are doing fine.

“They gone to school today,” he said.