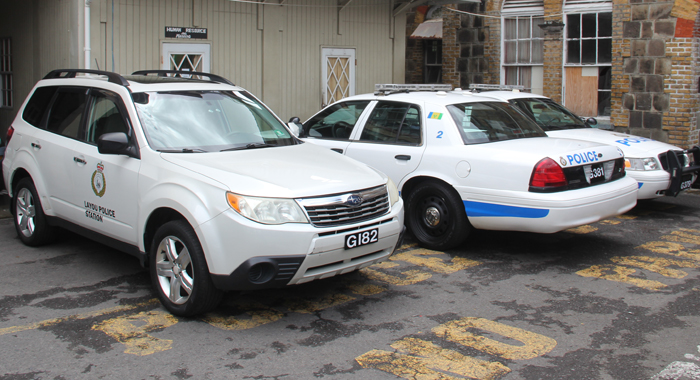 The Royal St. Vincent and the Grenadines Police Force (RSVGPF) on Friday received a donation of three vehicles — a refurbished SUV for the Layou Police Station and two decaled and refurbished, fully equipped police cars.

Mr. and Mrs Verna Scott, in conjunction with the Rotary Club of St. Vincent and the Grenadines, donated the SUV, while York Regional Police of Canada donated the police cars.

Speaking at the handing over ceremony at the Central Police Station in Kingstown,

“I am convinced that this vehicle that is being donated will go a long way to assist the police in the prevention and detection of crime.”

He said fighting crime requires numerous partners, adding that the Rotary Club is committed to improving the lives of citizens of SVG and spare no opportunity to do that.

He thanked the Scotts for making the donation possible and urged the police to ensure that it is used properly so that the useful life is extended.

Mr. Scott said the donation of the vehicle was the result of a need that he identified.

“That is, whenever the police are called to any particular area of Layou, they have to walk, beg for a ride, or they can wait until the Black Squad is available.

“And we saw a need that, the police in Layou — especially because we have had a lot of bad eggs coming out of there recently — should be addressed and so to contribute to this need, Rotary has asked me to help in purchasing this vehicle and I did that. And so I want to give Rotary all the credit for thinking about this and making it happen, bringing it together and making it happen.”

In expressing appreciation for the donation, Deputy Commissioner of Police Frankie Joseph said the RSVGPF has received donations of vehicles mainly from foreign countries.

He said that two years ago, he was on a radio programme and he said the police force alone cannot fight crime in SVG neither can the government and the Police alone do it effectively.

Joseph said he challenged the business sector and asked what is their contribution, noting that when he visits other countries, police will say how much the private sector there was donating.

He said he especially challenged vehicle dealers in SVG to assist the police.

“It is really exciting today to see that our local entities have come forward and donated this vehicle, which will help us tremendously.”

Joseph said that before the donation there was no vehicle assigned to the Layou Police Station and whenever officers there had to respond they had to get a vehicle from Barrouallie or the Rapid Response Unit.

The deputy police chief said that the vehicle will help in reducing the response time in Layou.

He noted that in 2016 members of the York Regional Police helped to set up the RSVGPF’s Sexual Assault Offences Unit.

The unit was launched last month.

Rouse noted that during this visit, the team from York Regional Police provided assistance in radio and training for enhanced communication, computers for enhanced investigation and record keeping and vehicles for mobility and response.

He said that further training is being provided to the sexual offences unit.

In response, Commissioner of Police Colin John expressed thanks for the generous donations and for their skills and efforts.

He said members of Rouse’s team were on the ground climbing antennae to ensure that the telecommunications equipment are repaired.

John said that the police force has put systems in place to ensure the maintenance of the vehicles, including quarterly inspections by the Deputy Commissioner of Police.

That does not prevent them from doing ad hoc inspections, he said, adding that from time to time the police force receives reports of officers driving below the standard of a competent driver

“And when persons are found to be reckless or careless, they literally have to pay for their ignorance in some cases. So we have things in place to deal with situations like that,” John said.

“Sometimes, you just have to speak as frankly as you can in these situations and make sure that persons understand the seriousness with which we are treating our resources. The York Police, they did not just go and pick up these vehicles. It was as a result of the resources of the Canadian people and we have to show appreciation and make sure that we take care of them the same way we will take care of our personal vehicles.”

John said that the RSVGPF is moving, under the CariSECURE and other projects, to have all police stations computerised.

He said the donation would assist significantly in that regard.