The New Democratic Party is dead wrong about crime 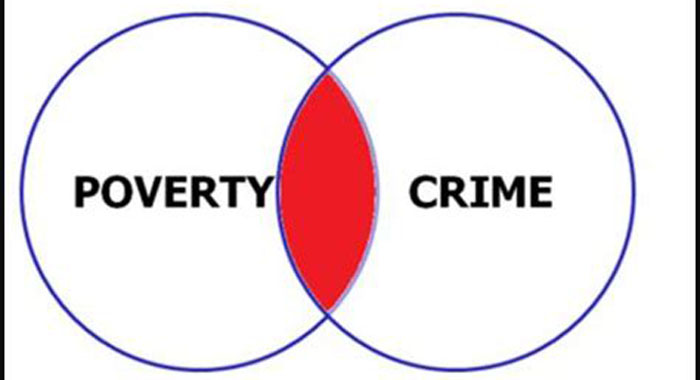 “For some time, the worsening crime situation in St. Vincent and the Grenadines [SVG] has enveloped the nation in a climate of fear that is contributing to a lack of confidence in law enforcement” (New Democratic Party [NDP] of SVG, Nov. 8, 2018).

The so-called “worsening crime situation” and its link to economic adversity has been grossly exaggerated by the NDP as my last crime and the economy opinion piece showed.

Since there are many party faithful who stubbornly refuse to accept any facts, some even maliciously accused me of data fabrication, it is necessary to continue this discussion by also interrogating the NDP position, repeatedly expressed, that crime has gone up in SVG in the past few years because of economic adversity, using the most recent annual data for SVG (Table 1) and for three additional countries (Table 3).

Table 1 reproduces the 2012-2016 crime figures for SVG reported in the previous essay, adding to it the data for 2017. This is done to question the NDP’s repeated refrain that there is a “national crisis of crime and violence in SVG” characterized by a skyrocketing murder rate.

** These figures refer to convictions rather than reports.

To the NDP’s certain dismay, the data in Table 1 show no overall upward trend in crime reports last year compared to the average of the previous five years. Murders and sexual assaults went up; shootings stayed about the same; and robberies, burglaries, and drug crimes went down. Thankfully, the rate of total crimes was down by nearly 18 percent.

In short, the data show no grounds for claiming, as the NDP repeatedly does, that “crime and violence continue to spiral out of control” based on a “worsening crime situation.”

To be sure, there was a dramatic and worrying increase in the murder rate in SVG between 2012-2016 and 2017 — indeed levels in 2016 and 2017 were the highest in our history — but this must be contextualized within the longer time period shown in Table 2 and Chart 1 to discover any long-term patterns.

This is why the Prime Minister of SVG, Ralph E. Gonsalves, was correct to claim that: “It is too early to assert that the new high for both reported murders [40 in 2016, 39 in 2017, and 33 up to the end of November in 2018] and the number occasioned by gunshot wounds represent a trend.”

To be sure, there has been an increase in murder rates all over the Caribbean, including SVG, during the past few decades. When Jamaica gained independence in 1962, the murder rate was 3.9 per 100,000 inhabitants, one of the lowest in the world. In 2005, Jamaica had 1,674 murders for a rate of 58 per 100,000 people, the highest in the world. In 2017, there were 1,616 murders in Jamaica, part of a decline over the previous 12 years but a level that still made that country the fourth most murderous place on earth.

SVG is no outlier when it comes to lethal violence.

The data in Table 3 below comparing the crime rates in four additional Commonwealth Caribbean countries (six others were discussed in the previous crime essay) only adds to what uninformed and biased NDP supporters would consider a puzzling lack of correlation between: (1) types of crime with one other and (2) types of crime with key economic indicators like per capita GDP and unemployment levels.

*not available; **In the last essay, I erroneously listed the Jamaica and T&T rates as 202 and 148, respectively. I apologize for the inadvertent computational error.

Jamaica, with the highest murder rate, had the lowest rate in the three other crime categories; The Bahamas, with half the unemployment and nearly four-fold the per capita wealth of SVG, had over twice the robbery but almost the same burglary rate and an only slightly lower murder rate; and Trinidad and Tobago had the same murder rate as SVG and three times the robbery rate yet featured one-quarter of SVG’s unemployment rate and twice its per capita GDP.

Murders and robberies, our most terrifying crimes of violence that intuitively appear to be connected to economic adversity, are actually unrelated to severe economic misfortune in both space and time among the 10 Commonwealth countries discussed in this series of opinion pieces.

There are two important lessons to be learned from this essay and the four that preceded it, though brainwashed NDP supporters would never be able to learn them: (1) disparities among all kinds of crimes, including murder, cannot be simplistically reduced to variations in unemployment or poverty levels and (2) it is not credible to claim that Vincentian “crime and violence continue to spiral out of control” producing a “worsening crime situation,” implying that we are somehow exceptional in this regard from a Caribbean perspective.

To make such a hysterical claim is like crying fire in a crowded theatre. Doing so shows that it the NDP’s inflammatory rhetoric, not the facts on the ground, that, “… has enveloped the nation in a climate of fear.”

After over 16 years in the political wilderness, hapless NDP leaders are still bouncing from pillar to post desperately trying to score a few cheap political points manufacturing one imaginary crisis after another. Once more they have failed.

Its increasingly disheartened supporters deserve better than this. Or maybe not.

At least former party leader, Arnhim Eustace, was honest enough to admit several years ago that:

“I don’t even pretend to know the mechanism but I think that with heads put together we can come up with some sort of mechanism to address this important issue [of crime] in our society. Because I am convinced that it is grounded in declining values. And all of us… are to blame.

“… but I do not – and I will repeat this anywhere – attribute crimes related to murder and so on to any government. That is a matter which stands before all of us.”

This is the fifth in a series of essays on crime and the economy in SVG. Find the rest here.