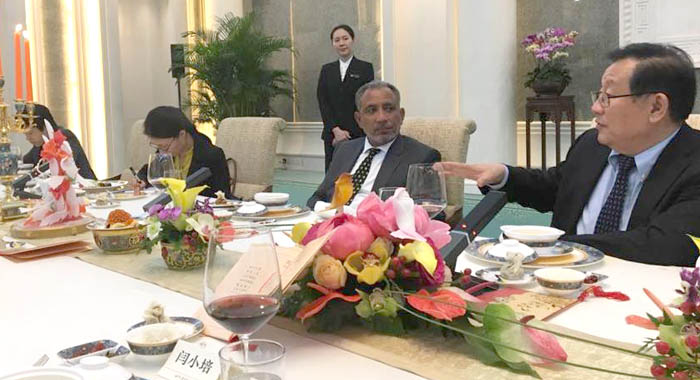 Leader of the Opposition Godwin Friday said that a New Democratic Party administration will manage its planned relationship with China in such a way that it redounds to the long term benefit of St. Vincent and the Grenadines (SVG).

Friday, who is also president of the NDP, recently led a party delegation to China where they held discussions, two years after announcing that the NDP no longer recognises Taiwan as a country independent of China.

At a press conference on Wednesday, iWitness News pointed out to Friday that a concern among some persons is the claim China has a tendency to exploit its relationships with smaller countries such as SVG or resource-rich countries such as those in Africa.

iWitness News further noted that it has been claimed that in some instances, Chinese workers would even construct a China-financed project in the recipient country.

Friday was asked what he would say to convince Vincentians that this would not be the case were the NDP to come to office and give effect to the One-China Policy.

“In each circumstance, you have to balance and say what is beneficial to you. Is it the immediate jobs — if you say that is the situation, I am acknowledging that it is — or having the project eventually functioning on behalf of the people later on.”

He said a government has to consider, on a case-by-case basis, its position with respect to each investment or project.

“It is hard to say generally, other than articulating the principle that whatever we do, we want it to benefit our people, first and foremost. To say how you are going to approach any particular project depends on the nature of the project.”

Friday said that some projects are so crucial “that you are willing to trade certain things that you may not be – it is like giving concessions to certain developers, for example.

“You want to have this particular project; you might be more generous in concessions to attract them. So you have to look to each on its individual basis. So, I will reiterate what I said, which is: whatever relationship we enter, whatever project — I will go as far down as projects that we institute — that you have to start with the question, how is it benefitting our people and if you can’t understand that positively you don’t do it until you can.”

“We have stated the policy that has been adopted by the party and we remain consistent with that and we did have discussions with officials in both Beijing and in Shanghai with respect to articulating that position.”

But two years after the NDP announced the policy shift, there is still public interaction between NDP parliamentarians and Taiwan diplomats in Kingstown.

Nigel “Nature” Stephenson, who is Member of Parliament for South Leeward, attended the Taiwan National Day celebration in Kingstown in October.

Generally, the one-China Policy manifests itself in such a way that people who support Beijing, at the level of Parliamentarians, do not accept invitations to events hosted by Taipei officials.

Friday was asked to give some clarity on the actions of opposition MPs like Stephenson.

Friday said that the NDP is a party in opposition.

“We have state-to-state relations [with Taiwan], and, as a member of the opposition, that may have been the reason why he attended, but, generally speaking, we need to engage in activities that are consistent with the recognition of the One-China Policy. But, our position is that as a party in opposition, we don’t determine what is the nature of the state-to-state relations.

“We would have heard me say that when we engage in the activities that we undertook when we went on the trip, that we had party-to party-relations, we had people-to-people relations and we took the view that before you can have state-to state-relations that it is not premature for persons to engage in those sorts of exploratory and beneficial relationships. So that is how we are approaching it.”

It was noted that the Unity Labour Party administration has said that the relationship with Taiwan is based on principle.

Asked what informs the NDP’s relationship with China, Friday said:

5 replies on “NDP outlines approach to relationship with China”