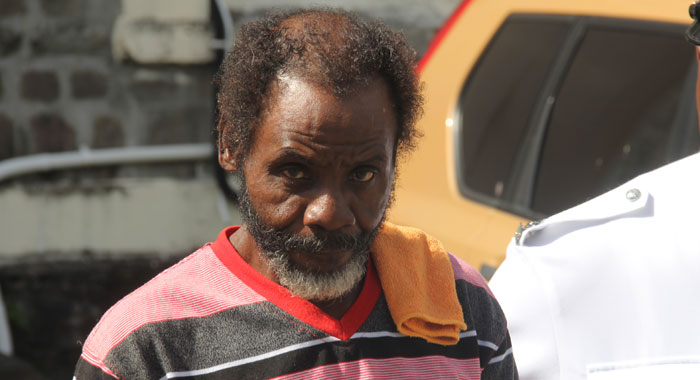 George McDonald on his way to prison on Friday. (iWN photo)

A 55-year-old man was on Friday sentenced to 15 years in prison for two counts of sex with a female relative, who was 10 years old at the time of the offence.

McDonald first assaulted the child when she was living with a mutual female relative, whose home is located closer to her school, four years ago.

The court heard that on the afternoon when the crime was first committed, the child was home alone.

On the second occasion, McDonald violated the child when the relative with whom she was living sent her to his home to borrow a cutlass.

Justice Cottle noted that when the social welfare official informed the family members of the report that the child had made, they immediately said it could not be true, without bothering to hear the details or from the child herself.

In mitigation, counsel Ronald “Ronnie” Marks said that the defendant was one of eight children for his mother and three for his father.

He is the father of two children, ages 31 and 12, and the grandfather of three.

He said that McDonald spent most of his adult life in isolation from the rest of the community.

The lawyer described his client as a very hard working farm labourer who works practically every day.

Marks said that McDonald had abused his position of trust, adding that another aggravating feature was the disparity in their ages, noting that the difference was around 40 years.

The lawyer said there was no abduction, use of violence, or threats used in the commission of the crime.

He further said McDonald was only charged after he reported a crime against someone else.

Marks said that had he not done so, neither McDonald nor the other man would have been brought before the court.

He suggested that the court begins with a notional sentence of between 10 and 15 years and adjusts according to the mitigating and aggravating factors.

However, Nelson disagreed that those were the only aggravating features.

He noted that at the time of the offence the girl was only 10 years old, adding that this is more than just a disparity in their ages.

Nelson said that while Marks said there was no coercion, the virtual complainant said that on the second occasion that she was assaulted, McDonald had pushed her on the bed and when she asked him what he was doing, he told her to shut up.

The prosecutor said that the Crown believes that the only mitigating factor is that the prisoner has no previous conviction.

Nelson said that based on the sentencing guidelines, the seriousness of the crime falls at level A, meaning that it was high.

He said the guidelines suggest a sentence between 10 years and six months and 18 years as a starting point.

“So that, my lord, it is our submission that the aggravating factors in this case far outweigh the sole mitigating factor,” Nelson said.

“Mr. McDonald, I think that rape of a child is vile. The local legislatures provide a maximum of life in prison for men who commit this offence.”

Justice Cottle said that there were other aggravating features, noting the psychological trauma that the child suffered.

“You abused a position of trust,” the judge said and noted the disparity in the ages of between McDonald and his victim.

The judge, however, agreed with Marks that there is an absence of any gratuitous violence.”

The judge said that because of the view that he has of the seriousness of the offence, he would start with a prison sentence of 15 years, half of the notional life sentence of 30 years.

He noted that there were two counts.

“And any offender who commits repeat offences of rape on our children can expect to receive consecutive sentences from this court,” Cottle said.

He said that he had arrived at sentences of 10 years for each count, but would reduce the second by five years.