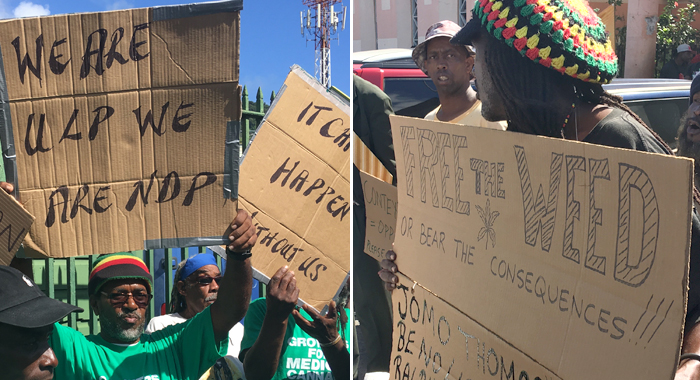 Some Rastafari supported while others protested against the bills on Monday. (iWN photo)

Members of the Rastafari community were, on Monday, divided as Parliament began two days of debate on marijuana reform legislation in St.Vincent and the Grenadines.

Like the political divide inside the national assembly, Rastafari were split along the street outside, with those championing the bills on one side and their brethren who oppose it on the other.

As the debate within the Rastafari community raged outside, Prime Minister Ralph Gonsalves told lawmakers inside the assembly chamber that, in response to Rastas’ request, his government had decided to withdraw a bill that proposed to permit Rastafari to use marijuana as part of their worship.

The Rastafari Community were divided in their view of the Medical Cannabis Industry Bill and the Cannabis Cultivation Amnesty Bill, with some saying that the government should legalise marijuana all together.

Among those championing this view was lawyer Carl Williams.

“The laws are not laws to benefit the ordinary man. It is to the benefit of a handful of greedy men, — greedy people in this society,” he told iWitness News.

Williams, who recently retired as a Crown Counsel, was among a group of mostly dreadlocked persons, some beating drums and chanting, calling for full legalisation of marijuana.

Williams said a particular clique” had “orchestrated” the laws.

“It is not for us,” he said, adding that the group to which he referred is “those persons with land and money and power in the society”.

He said that the bills are to the exclusion of the poor.

“They are advancing a reptilian agenda. It is not about the people. Are they planning to make 60 million people sick? How much medicine are they planning to sell? How many persons are they going to give these licenses to?” he said, referring to the various that persons would need to conduct business within the medical marijuana industry.

Prime Minister Ralph Gonsalves has repeatedly stated that his government is interested in a medical marijuana industry.

He has pointed to SVG’s international obligations among the reasons why Kingstown cannot legalise marijuana.

However, Williams rejected this position.

Williams said that Parliament has the right to make laws.

Williams asked where is the social justice, saying that people who have been planting marijuana for 50 years, adding that many of them lost their lives, have been incarcerated and have been slapped with huge fines before the court.

“Where is the reparatory justice in all of this? You are taking way something from a man you’re going to make millions out of it and the man is going to suffer? People are still going to prisons.”

He said legalising marijuana would be reparatory justice.

“The government must make an apology for the persecution and the prosecution that Rastafari faced in this country by successive regimes.”

Asked if he is philosophically Rastafari, Williams said:

Asked how he felt about the fact that his brethren were divided by marijuana, Williams told iWitness News:

On the other side of the street, among those decked out in t-shirt emblazoned with “GROWERS FOR MEDICAL CANNABIS” and a ganja leaf was Orlando Charles, of Campden Park, who told iWitness News he was “in love with the bill that pass today.

“I’ve been farming marijuana since the late 70s; ‘79 is when I went into the bush and I stay there for x-amount of time and I still planting my marijuana.”

He said that he had done “the whole works” in marijuana, from planting to trafficking.

“I think in this time, where the marijuana market, the illegal market, is right now it is not economical. No money aint dey in planting illegal weed right now. Man hardly mekking money,” Charles told iWitness News.

He said that one of the good things about the bill “is to get an opportunity for the amnesty, so you don’t have to look over your back, and then, the opportunity to market that weed free without terrorism from the establishment”.

During the amnesty period, persons with illegally grown marijuana can sell it to the medical marijuana industry, if they can find a market.

However, observers have noted that these farmers would have to make incriminating declarations to the government, and have questioned the intent of that.

Asked what would happen when the one-year amnesty ends and whether he had lands on which he can plant, Charles said farmers have a cooperative and lands.

“The lands that we have, due to the way we does plant marijuana, I think some of those lands wouldn’t be able to thing, right, but we own lands.

The government has made it clear that state funds and assets will not be used to assist interest in the medical marijuana industry.

It was noted to Charles that Jamaica and Antigua have decriminalised possession of small portions or marijuana.

“We are talking about development in our portion. See, because we in the mountains all these years ain’t making money and here we see an opportunity, legal too, where we can be involved in medicinal marijuana,” saidCharles, who, however, went on to say that he was able to use the proceeds of marijuana to send his daughter to university.

‘No problem’ with continued arrest for weed

Asked how he feels that marijuana would be legal for medicinal purposes but persons caught smoking it for recreational purposes could be charged.

When it was noted that persons would still be arrested, Charles, said: “It’s the reality. I have no problem with that, my brethren, because where I see, in the future, I see in the future all these things will fade away but it is a process.”

Asked how he would respond to the view that everything should be done now that the law is being changed.

“Because of the implications with the United Nations Charter and getting market for your medicinal marijuana in the international market, I think it is not a good idea for now.”

Charles, who described himself as Rastafari, was asked how does he feel about the fact that his brethren are divided in their position about the issues.

“I think it’s through, one, politics, two, lack of information; the level of consciousness. Nuff ah the brethren ain’t interested in national development. Nuff man vendetta with the government and their personal progress. The way I see it, national development come first.”

Charles said he dropped out of school at Form 3 and had to find a way to take care of his children.

“We are hearing everybody’s side,” he said.

“But it seems as though they are conflating the two issues with the recreational and medicinal. I can’t see any reason for stopping the medicinal bill from passing. It’s two different things. You’re going to stop farmers from making money? Farmers have product in the hills right now to sell.”

He said the company he represents want to supply medicine to Canada.

Ras Oba Chatoyer, who describes himself as fighter, and pan-Africanist and Central Intelligence of Africa told iWitness News that he opposes the bills that were being debated.

“… currently, in Canada, the seven largest companies in Canada that produce medicinal cannabis are all going to lose a billion dollars aggregate bynext year.”

“Rubbish!” commented Marks, as Ras Oba added, “Their stocks are nose-diving. Right now, in Canada, there’s an oversupply so there is acrisis.”

“Rubbish!” Marks again commented as Ras Oba continued: “The only way St. Vincent can get any benefit from medical cannabis, we will have to go right through the chain. We can’t ship our raw material. We have to do certain processing here.”

That is not true again,” Marks said.

‘taking off the shackles’

Lawyer Grant Connell, a marijuana advocate who was chatting with some protesters said he did not think there was anything about the debate for him to address.

“I have always spoken about the simple issues that need to be addressed first, from station bail right up to these matters not ending up before the court.”

“It wasn’t medical marijuana. It was taking off the shackles and not creating a criminal out of something as simple as the herb. So all of this, Iwill just look on.”

The bills were passed into law after two days of debate and amidst objections by the parliamentary opposition.