‘Business as usual’ in SVG despite climate change impacts 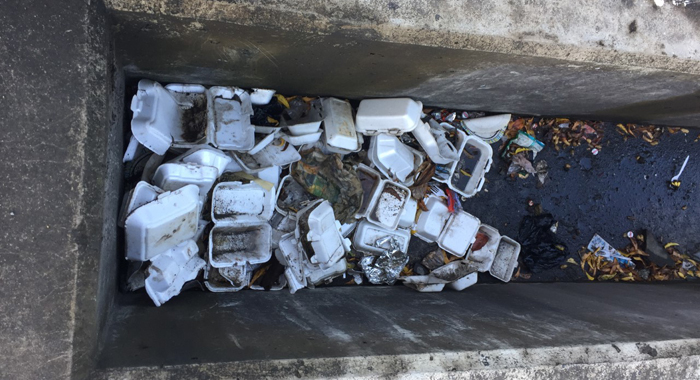 At the UN General Assembly, Sept 30, 2015, Prime Minister of St. Vincent and the Grenadines, Ralph Gonsalves spoke of the “grave and gathering threat of climate change” and of “rising and raging seas”.

And at the Organisation of Eastern Caribbean States (OECS) meeting August 2018:

“We are on the front line of the climate change war and are thus are committed to exploring the vast potential of renewable energies such a geothermal to send strong signals to the world that we are firmly committed to a low carbon future.”

While the prime minister has been busy attending various international summits delivering impassioned speeches on the evils of climate change, begging for further financing, ostensibly to mitigate its effects and build “resiliency”, and in spite of the newly created “climate levy” imposed upon local hoteliers, the situation at home appears to be “business as usual”.

In other words, deforestation, sand mining at beaches, unregulated vehicle emissions, man-made garbage clogging up drains, rivers, and beaches, over fishing by foreign vessels, and the burning of tyres are just a few examples of the total disregard to not only human and animal health, but to the very environment that is supposedly of such grave concern.

Burning tyres is especially insidious because this practice pollutes not just the air, but soil and water as well. When tyres are burned, they break down into hazardous compounds including gases which may include polycyclic aromatic hydrocarbons (PAH’s,) benzene, styrene, phenols, and butadiene, carbon monoxide (CO), sulfur oxides (SOx), oxides of nitrogen (NOx), and volatile organic compounds (VOCs), heavy metals and oil. (Source: US Environmental Protection Agency (EPA)

The average passenger car tyre is estimated to produce over two gallons of oil when burned. (Source: Rubber Manufacturers Association April 2003). Oil that exudes into ground and surface water as a result of tyre fires is a significant environmental pollutant.

The runoff oil produced by burning tyres, if uncontained, can be carried away by rainwater to local water sources contaminating them.  Additionally, the remaining residue can cause two types of pollution: immediate pollution by liquid decomposition products penetrating the soil, and gradual pollution from leaching of ash and unburned residues following rainfall or other water entry.

The health effects of tyre fires are numerous and include irritation of the skin, eyes, and mucous membranes, respiratory effects, central nervous system depression, and cancer. Uncontrolled tyre burning has been proven to be 16 times more mutagenic, meaning capable of inducing genetic mutation, than traditional residential wood combustion in a fireplace, and 13,000 times more mutagenic than coal-fired utility emissions with good combustion efficiency and add-on controls.

A nursing mother can transfer the pollutants she inhales to her baby through the fat in her breast milk.  During breastfeeding, infants are exposed to higher concentrations of organic pollutants than at any subsequent time in their lives.

So much for the country’s National Economic and Social Development Plan (2013-2025) which includes the improving of physical infrastructure, preserving the environment and building resilience to climate change as one of its strategic goals to facilitate and guide optimal improvement of the quality of life for its citizens.

Biodiversity. Forests are home to approximately 80 per cent of wildlife species, and yet the un-regulated deforestation, burning and clear-cutting of lands continue unabated, seemingly for the construction of more houses even though the island is currently overstocked with homes in various stages of completion, not to mention the rising number of foreclosures, which languish unsold and often un-occupied while the natural habitats of numerous species are destroyed.

Furthermore, the destruction of trees and green spaces not only contribute to the releasing of greenhouse gasses (which include carbon dioxide) into the atmosphere due to the reversal of carbon sequestration, it is also a major cause of soil erosion. The effects of soil erosion go beyond the loss of fertile land. It leads to increased pollution and sedimentation in streams and rivers, clogging these waterways and causing declines in fish and other species. Degraded lands are also often less able to hold onto water, which can worsen flooding. Additionally, tree roots anchor soil, so when trees are cut down, soil is washed away during heavy rains. Landslides are thus more likely with devastation to farmland, roads, bridges, and homes. Memories of the Dec 2013 Christmas storm come to mind.

The threats posed by sand mining are currently even more critical given the prospect of a significant rise in global sea levels over the coming decades.

The very “rising and raging seas” the PM spoke so passionately about.

At the UN General Assembly, Sept. 30, 2015, the President of the Seychelles, James Alix Michel stated that small island developing states (SIDS) are the “sentinels of nature and the guardians of the oceans”.

If this sentiment is to be taken seriously, the SIDS, and especially SVG, must do better, given that “Small size is no impediment to impactful contributions on the world stage,” as Gonsalves so eloquently told the Assembly.