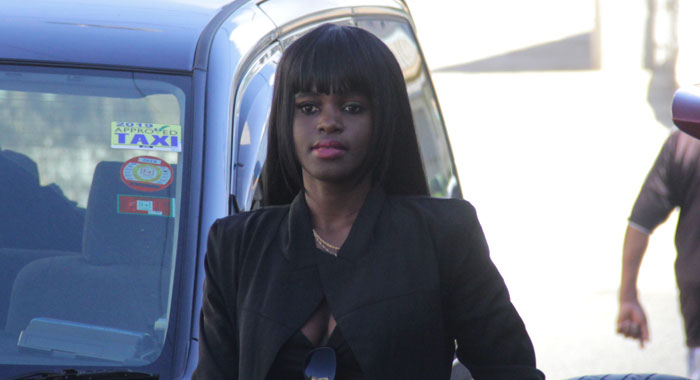 The magistrate’s decision at the Kingstown Magistrate’s Court on Monday came in response to an application by Farrell’s lawyer Grant Connell, and counsel Kay Bacchus-Baptiste, who had a watching brief in the case.

Farrell spent one month in court-ordered psychiatric evaluation after she was charged on Jan. 4, 2018, that on that date she used insulting language to Karen Duncan-Gonsalves — wife of Minister of Finance Camillo Gonsalves — by calling her “a dirty b**ch”.

When the matter was called, prosecutor Corlene Samuel told the court that the prosecution was withdrawing the charge against Farrell.

However, Connell noted that the prosecution was making a decision three weeks short of one year since Farrell was charged.

He further noted that there had been no disclosure in the matter and said that by withdrawing the case, the prosecution was leaving the door wide open to prosecuting his client again.

Bacchus-Baptiste told the court that she was agreeing with Connell.

She told the court that she had received a letter from the Director of Public Prosecution last Wednesday in which the DPP has used the word dismissed.

iWitness News understands that no such communication was sent to Connell, who has been representing Farrell from the date of her Jan. 5, 2018 arraignment when she asked him, in court, to represent her, which he has done pro bono.

Barbadian Queen’s Counsel Andrew Pilgrim, who on Jan. 29, took over from Connell as lead counsel in the matter, did not appear in court on Monday.

After leaving the court, Farrell, who wore a flowing black outfit, black sandals, black gloves, and what appeared to be a wig, made the same hand gesture she had made on her Jan. 4. 2018 arraignment.

After Farrell pleaded not guilty to the charge on Jan. 5, Samuel immediately asked the court to send her for psychiatric evaluation.

Magistrate Bertie Pompey had granted the application amidst strong protest by Connell, who noted that the prosecution had offered no information in support of their application.

On Jan. 29, Burnett, who, in an unrelated development, took over and became the Kingstown Magistrate, granted Farrell bail after receiving the report from the psychiatric hospital.

He ordered her to return to court today.

The case has triggered national and regional outrage against the legal system and political establishment in St. Vincent and the Grenadines, especially after Farrell’s claim that she was in a years’ long sexual relationship with the finance minister.

The finance minister has not responded to Farrell’s claim, apparently choosing to follow the advice of his father, Prime Minister Ralph Gonsalves, to maintain “a dignified silence”.

The prime minister, a lawyer, however, had commented extensively on the case, saying, among other things, that in arriving at a decision, a magistrate can consider information not disclosed in open court.

The prime minister said that amidst Farrell’s alleged demands was EC$50,000 and that the charges against her parents, Gailene Farrell and Calvert Charles, be withdrawn.

Gailene and Charles were before the court on unrelated attempted murder and arson charges and were discharged in July after the prosecution told the Serious Offences Court that police had misplaced a crucial piece of evidence.

One week later, however, the couple was committed to stand trial on the same charges, that on Nov. 1, 2017, at Lowmans Bay, they attempted to murder Edward Durrant, a fellow villager.