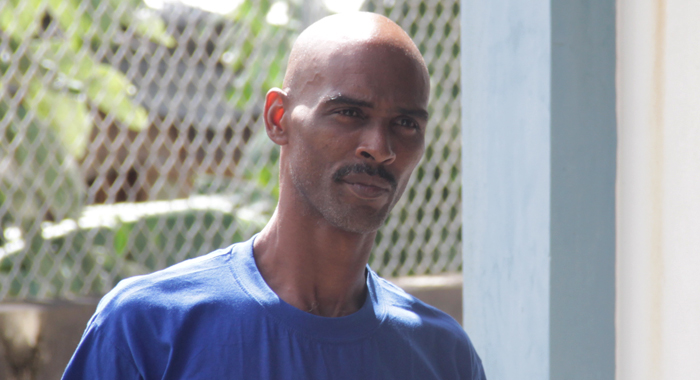 A man charged with possession of 334 lbs of marijuana that police might have never found had he not told them that it was buried on a beach has escaped any immediate penalty for his crime.

Kent Adams, 42, of Campden Park, might have gotten more than a one year jail sentence suspended for six months, had Senior Prosecutor Adolphus Delplesche not withdrawn the charges of drug trafficking and attempting to export the drug.

Adams was sentenced at the Serious Offences Court last Friday, two days after pleading guilty to all charges, relating to the offences, which he committed in Union Island on Dec. 18, 2018.

According to the facts presented by the prosecution, about 11 a.m. on Dec. 18, Corporal Forde received information that there was a drug transaction in progress at Chatham Bay, Union Island.

As a result, he, along with Rapid Response Unit officers Constables Pierre and Gaymes responded.

When they arrived, they saw no unusual activity, but patrolled the beach and saw Adams there.

About 1:30 p.m., Forde saw a black boat enter the harbour with two occupants who went ashore.

The corporal contacted the Coast Guard, which arrived at Chatham Bay within five minutes.

He searched the boat in the presence of its two occupants — Grenadian nationals –and questioned the captain as to why they had come to Union Island.

The captain told the police officer that they were there to collect two goats and to take a man to Carriacou.

The captain was further questioned about the man’s identity, and he said the man was tall and was on the beach in a camouflage pants.

Pierre and Gaymes went to the beach, where they had met the man earlier and realised that it was Adams.

Forde identified himself to Adams and cautioned and interviewed him.

Adams admitted to the police officer that he was in possession of six sacks of cannabis, adding that he would take the officer on to the beach where they were.

On the beach, the man pulled aside a net and dug up 11 sacks containing what turned out to be 334 lbs of marijuana.

He told police the drug was not his but that he was delivering it to the Grenadians.

In mitigation, lawyer Grant Connell told the court that Adams is father of boys 3 and 6 years old and has no previous convictions.

He said that Adams had pleaded guilty and was extremely remorseful for his action.

“To say he cooperated from the inception is an understatement,” Connell said, adding that Adams was “merely a delivery guy –a watchman” whose direct nexus to the crime was because of his unemployment.

He said that Adams does not use or grow marijuana — “not a traditional farmer”.

He asked the court to consider the mitigating factors, adding that he had never done a case where the defendant tells police that he had drugs and takes them to where it was — a location where the police would not have otherwise seen it, because it was underground.

“Times are hard, jobs are scarce, the jails are full,” Connell said and asked the court not to impose a custodial sentence.

He said that Adams once worked as a baker and is an asset to the society.

In his submission, Delplesche, in his usual jovial style, withdrew two of the charges, commenting, “Poor fella. Poor fella.”

Regarding the point that the defendant was before the court because he had told the police the truth, Delplesche said that a man once incriminated himself before Justice Frederick Bruce-Lyle during a High Court trial.

The senior prosecutor said that the judge asked the man if he knew what he was doing and the man said yes, adding that the Bible says the truth shall set you free.

“Bruce-Lyne said, ‘Well, this is one truth that will not set you free’,” Delplesche said.

In sentencing the man, Chief Magistrate Rechanne Browne noted that had it not been for his own admission, the police would have “come up short; very short”.

She said that she had to consider the quantity and class of the drug and the defendant’s role, adding that he performed a minor role in the drug ring.

Browne said that she had started with a custodial sentence of just under two years, because of the very significant amount of the drug.

She said she then assessed the aggravating and mitigating factors, including the sophisticated concealment, adding that this added to the sentence.

However, the mitigation factors, the chief magistrate said, include the man’s vulnerability to being exploited, and the fact that at his age, he had no criminal convictions.

“To have gotten to 42 without being involved in criminal activity, is very favourable,” she said, adding that the man has dependent family members, including two young children who are looking to him for guidance and leadership.

She further noted that he had cooperated with law enforcement officers.

“You just acted within your character. That is the nature of the man you are,” she said.

She said that all these factors subtracted from the penalty, and eradicated a custodial sentence.

Browne, however, said that the court has to be minded that the offence is a serious one and the quantity and ensure that the man is placed in check so that he can think a little stronger and not be susceptible to such coercion in the future, hence the suspended sentence.