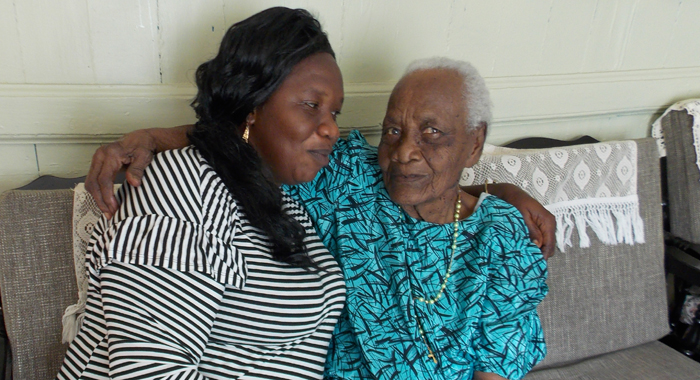 Centenarian Olive Comas,left, and her granddaughter and caretaker, Michelle Williams.

At 100 years old, Olive Comas, of Lowmans Hill, is as sharp as a tack and equally funny.

She remembers the days when Kingstown Bay had large flowering trees.

On Tuesday, Jan. 22, her official birthday, she was visited by Member of Parliament for West Kingstown, Daniel Cummings.

He inquired about her home garden, telling her that he sees it is “always growing with chive and –”

But before he could finish the thought, the spritely woman said:

“Yeah, but listen to me I hear they going to tek out licence for marijuana. And if I live, I will send and get my licence.”

Asked if she wanted to plant marijuana also, Comas said, “Eh!? Right round the yard,” sending her kin and her visitors into raucous laughter.

“Me nah wah no mo’ cabbage; me nah want no mo’ chive. Me and Michelle, she said, referring to her granddaughter and caretaker, Michelle Williams.

“Me just wah geh the licence. Her husband go gi mi some seed,” she said, adding, “What me want with cabbage and chive and peas.”

She said she does not know who will sell the marijuana for her, but maintained that she just wants to get her .

“Me just a wait pon Mr Gonsalves. Me nah know what he ah do.”

Comas was speaking at her home on Tuesday, her official birthday.

She, however, maintained that her birthday is Jan. 19.

“Well, ah born on the 19th ah January. That’s what my mother tell me,” she said, adding, “So I holding to that.

“But I don’t know anything about this other thing you talking about,” she said, referring to her official birthday, as displayed on her birth certificate.

Comas said that the previous night, as she was lying on her bed, she said to herself, “Well, me old…

“I lay down last night and I say, but what is this? Me old fuh true because all them people me wuk with a Lovers’ Lane gone. All them dem people me work with in the road gone, but, … thank God for having me so long.”

A function was held on Jan. 20 to celebrate the woman’s centennial birthday.

“Happy birthday for three, four days, my dear. You deserve every moment of it,” Cummings told the centenarian.

She said she is blind in the left eye and her right eye is “getting a little darkish now.”

“But thank God, spare me life fuh ha’ ah big fat lady. Look she a squeeze me,” said Comas, referring to her caretaker, her granddaughter.

Growing up, Comas remembers that as she was growing up, whole of Kingstown Bay was in bush.

“They had some big tree there used to buss flowers. You nah know nothing ‘bout that,” she said, adding that one Mr. Cropper at the Town Board cut the trees down.

“Well the weather come in and mash up the bay. Well, after the weather cease, this different thing start to build. Now, you go a bay side, yuh cyah even geh some bay sand – town,” she said.

She added that six predeceased her and four are alive. Out of the four, she said only two of them “ah face’n me.

“But that shouldn’t be. But thank God for them and thank God for who ah squeeze me,” she said referring to her granddaughter and Cummings.

She described Cummings as the son to whom she did not give birth, adding that was also the case with John Horne, former Member of Parliament for West Kingstown.

Comas paid tribute to her granddaughter, saying, “But she nah nice yuh know, and me nah nice”.

The centenarian said she likes to eat dumpling, breadfruit, banana and fish and Irish potato.

She said she likes chicken wing, but not the other parts.

Cummings said: “it really is a special honour and privilege to know this lady and for somebody who is 100 years old, her mind is so clear. And clearly, her lifestyle is an example for people to emulate. Her thoughts are clear, her recollections are good and her habits are healthy. She always speaks her mind.”

And as if to prove it, Comas added: “If anybody come down here an molest me, ah does cuss them. Ah does cuss dem. Me don know me old. Me going ah me grave just now. So dem go come down here pick me chive or pick me peas and me nah say nothing?”