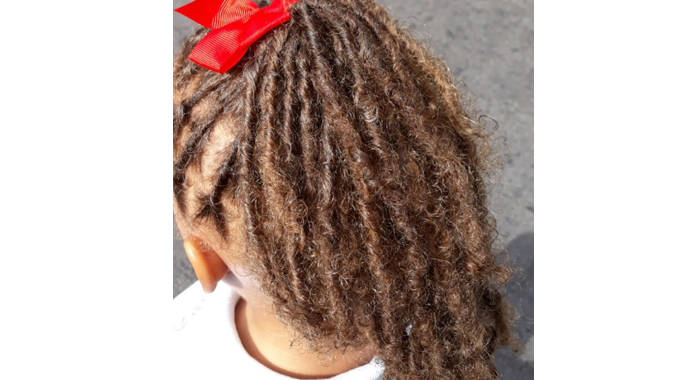 The 6-year-old student who has missed three weeks of class because the St. Mary’s Roman Catholic School in Kingstown said she must cover or cut her dreadlocks, or continue her education elsewhere, can return to classes with her hair uncovered.

iWitness News was reliably informed that the school made the decision sometime after receiving a medical certificate saying the Grade 1 student could not cover her hair because of eczema.

The child’s mother has declined further comment on the matter at this time.

Adriana King, a dreadlocked teacher at another school has been championing the child’s cause on social media.

“Thank you to the lawyers who assisted in this matter; let’s hope you won’t have to be called upon again, because of this policy,” King said.

She said that while the child has been allowed back in class, St. Mary’s RC “has decided to play word games to make it appear as though the child has been out of school this long because of the mother, rather than THEIR ULTIMATUM”.

“Anyways the one thing they did not say is that the discriminatory policy will be removed, but instead are trying to make it seem that the child would be exempted because of her skin condition,” King said.

“This policy needs to go and any parent with a child who has dreadlocks should challenge the policy because this is a fight the school cannot win. What they should do now though is to quietly remove the policy because the next parent might be a jaggabat. STOP DISCRIMINATING AGAINST RASTAFARIANS AND BLACK HAIR. Ah just saying an ounce of prevention is better than a pound of cure.”

The school, which receives government assistance, has a policy that Rastafarian child must cover their dreadlocks in class.

Some persons have said that the policy is discriminatory and should not exist in a school that receives taxpayers’ money.

Prime Minister Ralph Gonsalves, speaking on radio last week, said that he did not want to comment on the specific case but said discrimination against persons because of their hair is unacceptable.

“What I am going to talk about generally, we have long established, you can’t discriminate against somebody on the basis of their hair. A child is going to a school, once the locks are kept clean, that’s the important thing. So it’s a matter, as far as I am concerned, of hygiene. Simple. Simple. That’s all,” said Gonsalves, a lawyer and a Catholic.

He said his comments indicate where he stands on the matter.

The child’s mother, who has asked that neither she nor the child be identified by the media had previously told iWitness News said that while she also has dreadlocks, neither she nor her child is Rastafarian.

The mother said she lock up the child’s hair because frequent combing was aggravating her eczema.

The mother further said that the heat produced when the girl’s hair is covered aggravates the skin condition.

The school has refused iWitness News’ offer to comment on the development.

When iWitness News visited the school shortly after the matter became public, a female teacher was wearing a hairstyle in which a synthetic material was woven into her hair to look like dreadlocks.

The school, apparently, has no objection to the fake dreadlock hairstyle being openly displayed, but is firmly against genuine dreadlocks being displayed on its premises.

One past student of the school told iWitness News that when he attended 30 years ago, his schoolmates included members of a Rastafari family, who did not have to cover their dreadlocks while at school.

The past student felt that the policy was retrogressive for a school that had pioneered the way in giving teen mothers a second chance at a secondary education at a time when they were being expelled from state-owned schools because of pregnancy.

2 replies on “Dreadlocked student can return to class with hair uncovered, school says”